November is Doom- Born of Plagues : 'Cast Down" 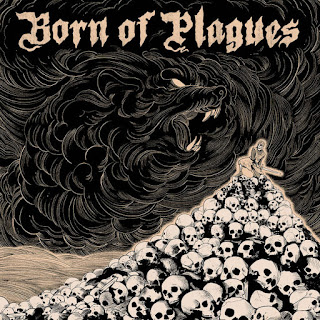 So far we have managed to bring you a wider variety of doom and all it's varied sub-genres, now we are going to get more into the sludge side of things, though the mood to this album is wonderfully despondent.  doom flavored sludge more than this being sledged out doom. There is a hug post apocalyptic sound. The roaring vocals are the albums only weak spot as they tend to be fairly one dimensional. They strength is the guitar . There are plenty of interesting passages, fully of melancholic darkness. The melodies they lull you in before pounding down a beating on your ears, are very expansive. This album is well recorded and the guitars sound incredible. The guitar melodies are actually the most doom thing about the opener aside from the deliberate pacing it trudges with.

Four minutes into the second song , there is a shift in vocals to a more Tom Waits like rasp, though it holds more melody than a growl, not unlike some of the vocals that Neurosis employs from time to time. The lyric's are pretty bleak when you can make them out. It is when we get to "Calling to the Void " that things begin to take more uniform sound and run together. My frits listen to this album, I started on the first song and did not realize I was on the third til I returned to my computer. The guitar solos on this album are more dialed in than what your average sludge band does.  The powerful chug on "Unheard" reminds of when sludge was embrace bay the brand of Victory Records bands like Bloodlet, looking back I can hear how Entombed also helped influence this.

The last song is the lumbering "Mountains of Souls" which drones on with it cumbersome riff, not really bringing anything new to the table, is it heavy sure, but it works off more of a song than a sound and did not really engage me any more than to acknowledge it was playing as roaring and ranting in the back ground. If you are into really have , with grim foreboding then this is an album for you as long as you do not need to much in the lines of songwriting. Thought the first few are strong and it gets a little mired into the heavy. I will give this one an 8 not Album of the Year material , but very solid and worth a listen if you are a fan of sludge. .

Email ThisBlogThis!Share to TwitterShare to FacebookShare to Pinterest
Labels: 8, Born of plagues, sludge