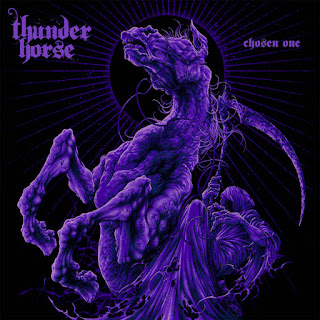 This sounds like a long lost band from the 90s. In the grunge era of the 90s many bands like Sugartooth and even to some extent Monster Magnet or Type O Negative, played a version of doom that did not conform to the power metal tendencies of 80s doom like Candlemass or Trouble and something rooted Sabbath's legacy but on the drugs of alternative bands of the time. In other words a smacked out grunge flavor. That is where these guys are coming from , but with a wall of metallic guitars. Throaty vocals with some raw rasp, but sung not screamed or growled. They are pretty dark as you can feel as much as hear on "Among the Dead".  Though melody wise I think the first song works better where this one works off more of a chant for a chorus.

There is more of stomp to "Rise of the Heathens".  On this song I can also hear colors to the singer's voice that remind me of both Blackie Lawless and Wayne Static. The riffing is more overt metal on this song but it works . They have enough passages to give the song breathing room.  The title track boogies for the apocalypse though does not live up to the bar they set on the first song.  "Broken Dreams" sounds like Alice Cooper jamming with Ministry. Which I am fine with. I like the thought behind dropping things down so they ride on the bass line, but it leaves the vocals exposed when they are perhaps best set howling against the guitar.  I like the effects on them , but I am not sure they can carry the song. It might just need to grow on me in that regard. "Texas" is a huge shift in dynamic as it vocals and acoustic guitar taking a apocalyptic folk turn like the Butthole Surfers.  I can appreciate covering a wide span of sonics, though not sure this is their strongest side.

They begin to start reminding me of the Melvins. Some of this might be in how they swing the groove to ":Halfway to Hell". Which is one of the album's stronger songs. They close the album with an interesting choice in Traffic's "Dear Mr Fantasy", which for years I though was originally by Lynyrnd Skynyrd  . I will round this one down to a 9 , it is very solid , and I will always keep my ears open for what the future brings from these guys as I have enjoyed my time with this album. Fans of the Melvins and Butthole surfers or even Monster Magnet who want dark bong songs with a twisted smile would do well  to check these guys out.