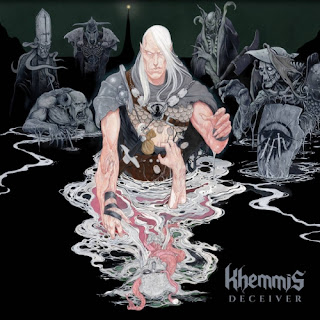 These guys used to sTeem like a more NWOBHM obsessed version of Pallbearer. Over the years they have established more of their own identity and that can be heard more fully on this album that starts off with a more thrashy power metal tone to offset the more melancholy melodies. The lower vocals toward the end of the song are strong and something they need to explore more of in order to fully carve a new place for themselves. " House of Cadmus" finds them slowing down from the pure power metal and getting more serious in their introspection. the guitar playing reflect this as they do not back down from the shred it is just more tasteful.

"Living Pyre" is more progressive in how the song is arranged , with plenty of room for more guitar solos, the vocals some time fit in angular phrases rather than the smoother but commanding approach we heard on the first song and they dialed back from with each song after. There is a little more of a doomy to the guitars of "Shroud of Lethe' . Things grow even more shadowed in the introspection of  "Shroud of Lethe" . The vocals go a little lower once more on the verse than , higher on the chorus to bring out the Pallbearer comparison again and create more of a power metal feel. The growled vocals do shake the power metal thing, while the harmony guitar parts do not. However the guitar on this album is all very strong. They pick up where they left of with "Obsidian Crown" which feels like an extension of the previous song. Lyrically it is more focused.

The last song is yet another step in a more traditional metal direction. Less doom than say Solitude Aeturnus the dark longing of the guitars lean it in that direction until the almost iron Maiden like guitars gallop into place with the dramatics of the 80s. Queensryche almost becomes a fair reference point. Overall they are really good at the style of retro metal they are resurrecting here. I will give this album a 9, with the guitars being what tipped the album in the higher direction, though the vocal have also continued continued to improve as the move in this more power metal direction.