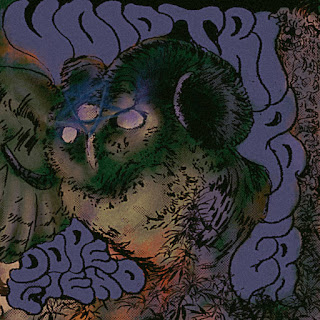 These sort of bands relish the devotion to Sabbath. The fuzzy riffs that lumbering out of one another high light this fact. The catch with this band is the vocals keep them from sounding like a Sabbath cover band.  The first song was about to lead me to assume this is because the guy providing the vocals is more of a obligatory thing, it holds more in common with Cathedral, though less dramatic than what Lee Dorian would do if given the chance. This is the guitar players show, though not the most dazzling guitar solo or even the most Iommi accurate depiction.  On "Burning Woods" they throw in a Dollar Store Ozzy version of vocals. The guitar is dialed in a little more when it comes  to the solo, but from a song writing perspective this band seems content  aping a sound rather than bring any new life to it.

You come closer to hearing who they might be on "Hollow' which returns to the more Billy Goats gruff vocal, the pace picks yup and the guitar continues to improve, there is a High on Fire like boogie to it. Not borrowing as much from Venom or Motorhead as those guys do, the song slows into more of the woeful rumble as it progresses. They flip flop back to the more sung vocals on "Satan and Drugs", You know there is a lot of talk about these guys being down with drugs but it sounds pretty straight forward and not like the spent much time tripping to come up with any of this. Though this is one of the album's stronger songs. Lyrically they try to emulate 'Fairies Wear Boots". it is a shame they did not do more with the lyrics as those are two of my favorite subjects so it feels like a missed opportunity.

The last song kind of doubles down on what we have heard , though leans more into Venom and Celtic Frost, which I can appreciate. The vocals have a more Cronos like snarl. Maybe High On Fire is to thank for that , but I am just saying where I know those sounds come from. More pounding and punishing that what Sabbath normally deals in and hell even at their heaviest on the two original line up they never beat your head with the riffs like modern day metal does. I will give this album an 8 they are great at what they do, though I think could use more trippy sounds as this is pretty meat and potatoes kind thing.