November is Doom- King Buffalo : "The Burden of Restlessness" 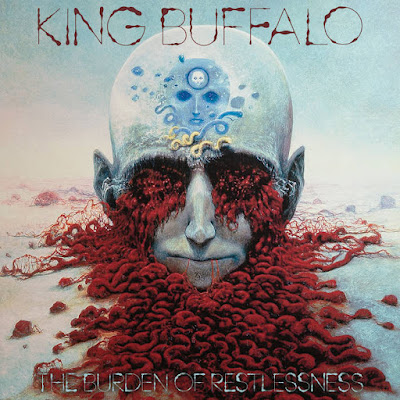 This band from New York graced our best of 2020 stoner rock albums and they are monsters  when it comes to writing as they have unleashed a new batch of exotic grooves that borders on being progressive though the bulk of what they do when not using a taunt Tool like snake of a riff is to drone on it until the drugs simmer some.  The vocals do not blow me away as they are almost spoken, but it is where they fall and how they ride the riff that is what works here. There is shadow to this but it is not dark in the sense of what we normally consider dark here, but heading in that direction. You can have too much of a good thing as "Locusts' is simple more of the same grooves the established on the previous song, I can hear where they might sound like a heavy jam band live here.

"Sliverfish' finds them changing things up, there is more of a indie rock/ math rock tone to what they do here, it is brighter in tone, they do shift the dynamics and rock out by the end. "Grifet" works off a similar Tool like palm muted tension that a great many of these riff work from, It is darker so this circling of a theme works better than it does when the songs run  together previously on the album. They dig in a add more chug as the song progresses though the vocals stay in the same droning chant that is more spoken than sung,. The drums give a little 80s Rush groove to "the Knocks". The rest of the band coils back around similar palm muted syncopation that seems to be the butter than dominates this bread. It opens up the room for a guitar solo of sorts that is more of a melodic sonic texture .

"Loam" is effective at what it does. What it does however is something that circles the themes we have heard on this album already. They are so good at creating this mood, that it is almost  forgivable in it's redundancy. At times this falls more under the sound rather than the song focus, the sound of what they do is a familiar sound I like , so hard to argue against it, I will give this album a 9.  I mean it is not like Tool is doing this sort of thing any more so if you missed the palm muted chugging days from them here it is.