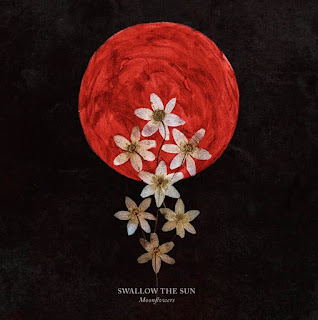 The 8th album by the Finnish orchestrators of doom. When it comes to orchestras they went overboard this time and made a double album with one of those discs being classical versions of the songs from the first disc, but  wanting to enable such over indulgence this review is just the first disc of  metal songs.  Their last album placed number 4 on 2019's Best Doom Albums list so the bar is raised rather high. The first song has a catchy melody that proves you can ease hooks into your melancholy. These guys have always effectively worked harsher vocals into their songs and do it in a less predictable way here as well. The second song "Enemy" is pleasing but kind of drifts .Sung vocals are more dominate this time around , but they really care about their sounds and arrange their songs in a way that gives every thing plenty of space. On " Woven in Sorrow" the heavy is not delivered until the end. The melodies wash over you with a languid malaise.

There is more of a chugged drive to the riff of "Keep Your Heart Safe From Me" . They tread in more metallic sounds , that more common in more European death doom, owing more to bands like Paradise and Moonspell's  late 90s metal days. Thing ring out with even more contemplative melodies on "All Hallows Grieve". Which should have come out last month. There is some great tasteful guitar playing on this duet that introduces female vocals. This does point them in a more flowery symphonic metal direction but it still works. The moodiness of the melodies is tightly woven with 'the Void" which does not find the band getting too grandiose and simply works of just being a well written song. 'The Fight of Your Life" has great lyrics, the way it builds into a heavier climax works more off of a tried and true formula for them.

They throw into themselves into a more black metal  heaviness with "This House Has No Home". This is the only time on this album they go all the way to blast mode to contrast the more morose crooning. it  Overall this song and the rest of the album I would put this up there with the previous album in fact I am going to edge it out a little and give this one an 9.5, as sometimes the just focused on less progressive tendencies and just wrote good songs which might be more straightforward of an affair but less is more... even in metal a genre known for excess.