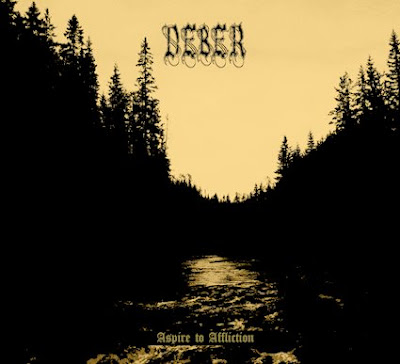 Sweden might not be the first place I think of when it comes to doom, but for this to be only two dudes they kicks up a big sound. Lots of layered atmosphere and dissonant angular guitar melodies. While I love the sub-genre, this is the first funeral doom band I have checked out in a minute as the problem with them seems to be given the nature of what is going on to get a lot of one-man band deals that were recorded in their bed room. It is ok to be minimalist, but I think this is a genre that fares better when it hits you will a full pulsing wall of sound. These guys are not amateurs clowning around. One is from Ondskapt the other from Avksy. They know what they are doing even if this is a different direction for them. They manage to keep my attention for the first song which is impressive considering it is over twelve minutes long and unless you are Iron Maiden long songs rarely keep my attention. So they have that going for them.

Just because funeral doom is my favorite sub genre of doom, it does not mean I am just willing to accept anything even by professionals. Much like most forms of extreme music the sheer heaviness of your first taste of a band can be impressive enough, then you are left with the question "Ok, but can you write a song?" . For some just heavy is good enough, not the case here, "Decay" is more straight forward , it throbs off one riff with less intersecting with it. Not an unpleasing listen just something that is more back ground music and less like a song I am invested in to listen to multiple times. The growling vocals might give things one dimension in that department, but there are plenty of doom bands who make it work.

By the time we get to "Soulbind" the songs kinda feel like they are running together. An indication of a finely honed sound but not as much investment in the song. Sure they break things down to clean guitar tone strumming in an unhinged creepy manner, but not hearing what I would say defines who they are or where they are going. There is an intro and an outro, but this album is really just these three songs. Three long songs but three songs none the less.  I will round this down to an 8 for the more sound focused, though in truth I think it is a fair score, if you are not a fan of funeral doom then this is not going to win you over and you might even think that is high, I think this project has potential and want to hear where they go from here. Out on Personal Records.