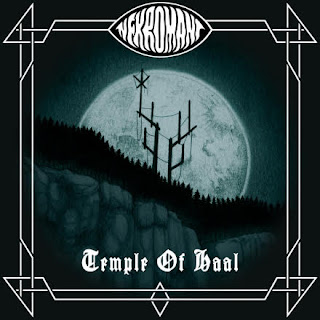 My first thought about this band is they are power metal. Power metal is not totally removed from doom as there are many connections like the Dio Sabbath years and a whole string of Sabbath albums that came after "Seventh Sign". There are darker textures that lie under what this band does, bringing newer acts Unto Other or In Solitude to mind.   The pace picks up even more to the point that it gets happier than the opening track when they gallops into 'the Woods" . Things do not begin to cross over into what we consider doom until we get to the third song.  I do like the more melodic turn this song takes toward the end , it is more introspective and counter balances the power metal build up

"Nekrolith" brings Iron Maiden more to mind than Sabbath. Thought not done with the same skill Maiden would have gone about this, though I am just writing that as a point of reference for readers who might not already be under the notion Maiden is one of if not the greatest metal band so of course some young upstarts like this are not going to be able to summon their skill.  "King Serpent" offers more evidence that when these guys lean into their doom side more they are much better off than trying to be Iron Maiden , which is a ship that has sailed decades ago. But slowing things down , allows the singer to do more, while he has a good voice , he only has one belting tone that he uses thus making the songs have a uniform sound, Unless you are Iced Earth or Nevermore this has been a long standing problem with the sub genre.

They are good at what they do even when it is the tried and true twin guitar chugging. I am not sure that "Hackle Klint' has enough going on to warrant being an instrumental , but they play it well. The bass player has a long way to go if he wants to be Steve Harris.  They come off the gallop to add some introspection and melody to the title track. This is a much needed dynamic shift. The last song is a return to the stock pile of generic metal riffs assembled and performed with enough passion to make them work. I at least believe that these guys believe in what they are doing.  I will give this one an 8,5 , think they could be darker and more doom, but enough to appeal to fans of doom.