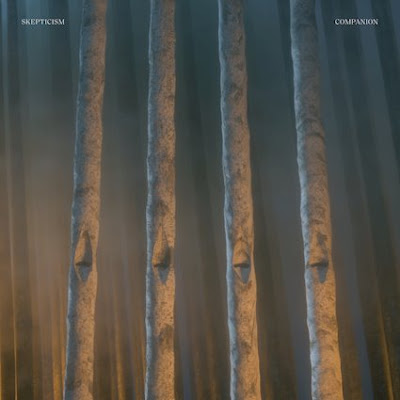 This album came out in September , but I held off for this month.  Six albums in 30 years is not what you would call prolific , but this band from Finland has built a rep for themselves and remains a name at the fore front of funeral doom. That does not mean this album is funeral doom, as the first song moves at more of a triumphant Paradise Lost pace. The vocals stay at throaty growl, to be honest you hear a lot of people refer to death metal vocals as Cookie Monster , but this sounds more like the Muppet for sure.  Within the first minute of "Intertwined" and they shift into a creeping palm muted riff that has a Tool feel. Not allowing themselves to be confined to doom works well for their songwriting. I can hear almost folk like guitar melodies on this one as it progresses. They do trudge into some heavier more oppressive riffing, but they sound more inspired when they break from what they have been doing for 30 years.

The organ and hesitant drums that linger in the atmosphere are the first reminders of funeral doom. going into ' March of the Four". They kick into things in a way that will please long time fans of the genre as this is what they have likely been waiting for. They are good at it. His growl draws out the phrases with more resonance. The guitar might not be as fresh but every one is doing what is required of this sort of thing I think despite a change in sounds it is smart for the band to not just make an album of this sort of thing at this stage of their career. Like any genre it is a staple to hold their center , but not limit them. The guitars take on a darker more aggressive buzz with " Passage". They are not suddenly becoming a black metal band, but the guitars do take on that kind of evil feel. The chug they lock into beats Satyricon at  being Satryicon . When they bring in the slower doom passages they have more impact.  My favorite song so far.

"the Inevitable" finds them well within their wheel house, but not making the same strokes with the same brush, The colors they choose circle the same spheres. Acoustic guitar books ends some phrases here and there, but not big surprises . They linger on the more melodic strum of guitar, the vocals growl into stagnation leaving the guitars to do all the heavy lifting and they seem up for the challenge, the Tool comparison could once again be used when it comes to the palm muted groove the bring to the table again . I will give this album a 9, it might be the most impressed I have ever been by these guys, normally the vocals are a sticking point but the songwriting wins out at the end of the day, doom bands to come could continue to learn from these guys in that regard.