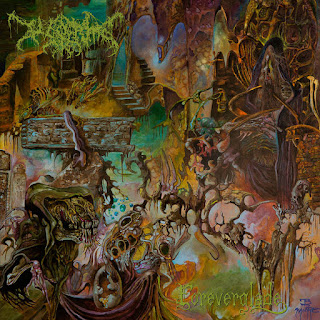 There are a few ways to do death doom. Neither is wrong. Some rely on Incantation more and others rely on Paradise Lost, then there is just slow death metal. If these guys have to pick a team they would be Incantation, but they employ a wider ranger of atmosphere and come across sounding way more legit in their mood. Much like funk , metal is something you can no fake, I need to feel the darkness. Even when the pick up the pace of  their chug I am never left thinking ok this is just slow death metal.  I just reviewed the new Apparition  and those guys are more death metal with a side order of doom. "Murk Above the Dark Moor" has ringing sounds to keep the creepy going. I am almost more inclined to think of this as blackened doom, as the vocals shift into hateful nastiness. There are no slouches in the musical department as the guitar solos will show you.  The drummer is not as versatile as the dude from Apparition, but these guitars in this project are more grandiose and willing to shred .

Going into the almost 12 minute "Cloaked in Night Winds" when you think they might be taking a turns toward getting mired into the typical tropes they add a ghostly sound or turn course with a more driving riff that honors these sounds rather than making them seem incidental.  The it took nine minutes for me to glance up and see where we were at in the song means it kept me engaged more often than not, they sail down a river deeper into the darkness and find the sound to convey this. The song generally works of f more of a funeral doom drone. The guitars get more epic, which is an over used adjective particularly with power metal, but in this context I think it is fitting as it conveys the almost more classical influenced sweep of guitars taking it some where else. Once again I can hear a black metal influence in the romantic way this is carried out. Not to take a way from the crushing weight of the riffs to this one.

The best song is the under four minute "Subaqueous Funeral" which still gets the job done with half the sprawl and better groove and more time for the solo to rip a new ass hole in people who might have thought they could play guitar going into this.  Not that a solo is going to make or break a song for me these guys are just great at them so they make sense and add to the song rather than the song serving as a book end for it. While the last song does fall into some of the more typical sonic places in terms of the flow when it comes to funeral doom I will give them credit for painting it with new sounds and not being afraid to go beyond the typical metal choices , while staying dark.  Midway into it they keep it interesting by locking into a pretty powerful chug contrasted by the creepy clean guitar.  I will give this one a 9.5 , 20 Buck Spin delivers the goods again , wish I listened to this one when the promo popped up in my in box a few months ago but glad to have it now.