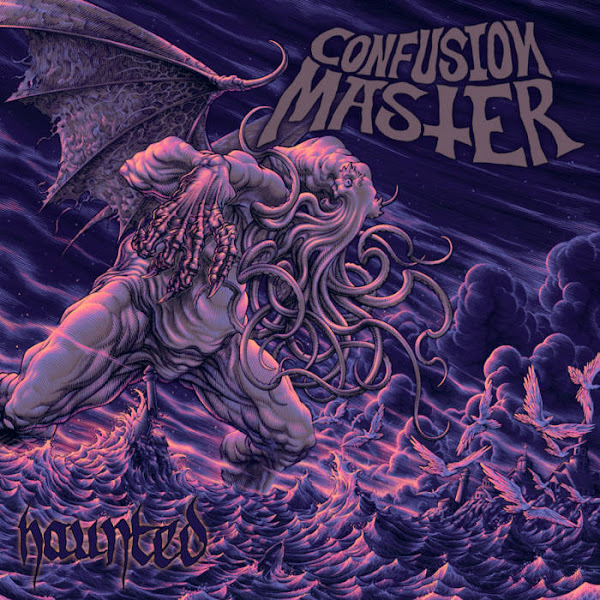 I am not sure why Cthulhu is on the album cover as there is nothing Lovecraftian about the lyrics, though they are horror movie inspired. They are heavy as fuck, but still care about the songs. The opening track using samples well to set the mood and jams the fuck on on burly grooving riffs that are inspired by an evil bong. The second song backs off a little and lets the vocals develop more, they stay in the range of your typical stoner sludge not as bombastic as the opener, but if they tried to keep that up for the entire album we would have crashed before the third song. However after a few listens I would say the second song is not as focused.
They create more of a hypnotic mood, with a droning mesmerizing groove that unfolds with "Casket Down" . Where doom is meant to be oppressive or bathe you in misery, perhaps sailing you off into an escape, the mood here is more geared to the pulse of narcotics. Sure if you are just into the kind of heavy they hit you with on the first song then you are probably missing the point and not doing the kind of drugs that would have kicked in by the time you were this far into the alum an could appreciate this more. Yes it takes three minutes to get to the riff that is the point of the song, but the journey is enjoyable. The song ends with a Charles Manson sample, which I think is a good choice.
The intent of "Jaw on a Hook" at first sounds like it is to pummel you with the weight of the fuzzed-out riff. Vocal emerge and much like the bulk of the album that are like a ghostly version of Ozzy's whine. Not as melodic as what Ozzy did, while Ozzy's personality often overshadowed the fact, he was a great signer, more so in the Sabbath days. This guy cannot come close to hitting those notes and is more of a crazed creepy narrative. The title track just kind of drifts out of the previous song as it follows the smoke-filled plod of the bass line. Thing are allowed to simmer for a while They jam on this drone which is  pleasing to the ears and perhaps more so if you are altered, not their best written song, but perhaps their most mind felt vibrational output. The last song "Under the Sign of the Reptile Monsters " kind of carries on the established mood. There is a looser jammed feeling. The wail of the vocals the only thing that kind of forces these elements back into place.  Where I might have held using a sound over writing a song against some bands this month, I think these guys do it in a way that benefits the listener more and I sure is spectacular if they ever play live in this apocalypse world. I will give this one a 9.
Posted by Wilcifer at 6:36 PM