Wrekmeister Harmonies : "We Love to Look at the Carnage" 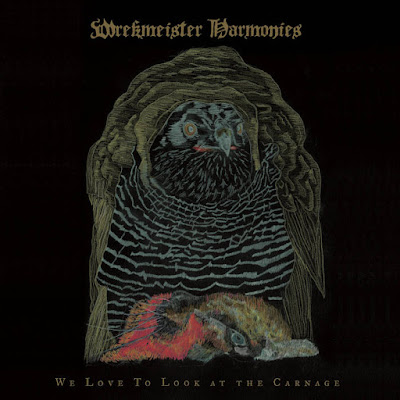 Now on their 5th album these guys have crossed over fully into Nick Cave's neighborhood. I guess that place is called folk. It's sort of dark, more moody. Minimal arrangement and the vocals dominate like folk. Unlike folk they are more spoken than sun. Jamie Stewart from Xiu Xiu lends his voice to the song "Still Life With Prick Cancer" .  Things get weirder here. There is noise floating around. Stewarts vocals are a hushed desperate plea. It works much in the same way as the first song, but with none of the Nick Cave sense to it. I think it's the most subtle use of dynamics I have heard this project encompass. It's very pretty , but not something I would keep in my iPod and put in rotation with Tom Waits or Joy Division. Those acts are more song focused. This paints with the sonics. I often complain about bands being ore focused on sound than songs. Well if you are going to do it and make it the exception to the rule this is one way.

Thor Harris of Swans also adds percussion to this album. That makes perfect sense when you consider the direction this is going in.  It is only heavy in the sense the abrasive turns it takes challenge you. It has been a weird day for music for me as I just finished reviewing the new Today is the Day. If you like this album, you will likely at least appreciate the Today is the Day album as it disregards most conventions of rock music. This is more like the looming dusk that commiting to the kind of darkness you feel.  "Coyotes of Central Park" gets back to the kind of morbid Americana they
simmer in on the first song .  "the Rat Catcher" is almost just like the new mournful post- "Push the Sky Away" Nick Cave. It's well done and there are pleasing sounds from the instrumentation , but it's Nick Cave worship for sure. For minutes in their are more intense electric sounds coming that give it more depth. It's doomy without owing anything to Black Sabbath.

"Immolation"is the last song and it goes into a more atmospheric post -rock sort of thing with the rock elements dialed back. It carries the same kind of narration as the bulk of these songs which fades into the background at this point. I will give this album an 8. It is pleasing to your ears, and well done for what it is , but what it is comes too close to Nick Cave and I already have all of his albums. If you are a fan of these guys you can round it up a half a point.