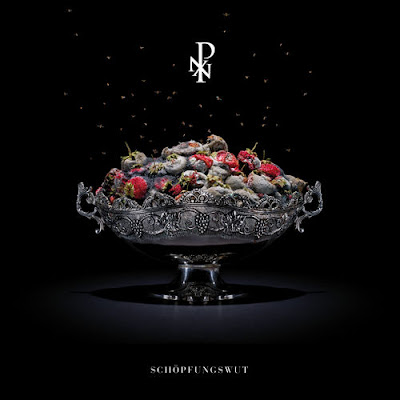 It is not politically correct to say the region, culture and nationality effects music made. It is assumed black metal can be created from anywhere. For a genre supposedly steeped in the occult it's fan base has very little knowledge of it if they do not know about egregore. Animism factors into the energy held in certain places . The embodiment of it by a culture is reflected. Germans have a cold stark way of doing thing and are unable to escape their militant energy. This was felt in the thrash that came from the region in the 80s and in today's black metal. It is why industrial music always works from here. If you can not tell the difference in the feel of black metal from Germany and Norway you should not be listening to it in the first place. There are more guitar solos than I remember coming from these guys and for a band that was once more experimental this is very straight forward blasting. The atmosphere is not until the 30 seconds exiting the song.

The second song finds their sonic spectrum improving with increasing darkness and melody coming from the guitars. Vocally German is a guttural language. Very little is require to make it sound heavy. He could just read from a dictionary and it would work, though here is some added rasp. They begin to get more experimental adding layers of chanting . The guitars ride a tense throb over static drums. They continue into the third song with a similar vibe and tremolo guitars. The vocals multilayered. Sung vocals crop up on what is the chorus by their standard. These are not a Killswitch Engage type of good cop dynamic , but more like drunken soldiers singing old pirate songs.  This marks their first album with vocalist Tongue, though not a huge expansion of vocal colors . The band's third album in 8 years so they know themselves by now. By the 4th song  things are being to sound similar. This is after they have let up on the blast beats .  By the 5th song they have defaulted back to blasting and the once novel multi tracked vocals are beginning to wear on me.   They are well played and the guitar solos are an all to under deployed element of black metal I like hearing used tastefully.

The album closes with the title track. It is pretty much a blast fest. It is certainly measures up to all the other bands that do this, but I want to hear who they are not something I can hear from everyone with a bullet belt these days Though I get blast beats can feel obligatory when you are a black metal band . With that said it might not always be my favorite flavor of black metal but there is no denying that These guys are good at what they do. It's a solid album I will give it an 8.