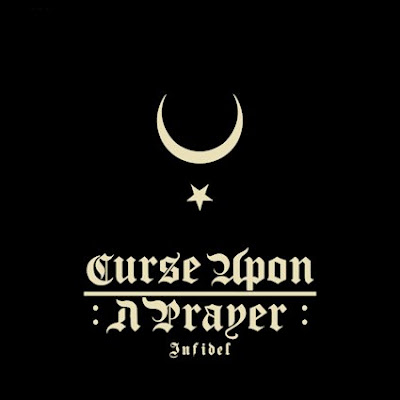 I was excited to find this one in my in-box. I loved their last ep. These guys are what black metal needs. Black metal needs more hatred. Last year I brought up how someone needs to make black metal hate again and these guys can do it. I also said last time I reviewed this band that while I did not find lyrics raging against Islam to resonate with me culturally, where I prefer satanic music that blasphemes Christianity, I have an ever deepening respect for how passionate these guys are about what they do especially in today's culture. Black Metal should not politically correct. Black metal band that try to play it safe or are social justice warriors are neutered. You get where I am going so let's talk about what matters the most, the music. There is a denser more complex and melodic sound this time around. The only problem as I hear it is the first three songs kind of run together. They are blazing fast so I had to give them a second listen before proceeding. The vocals are a nasty sneer that carries a bitter screech to it. They are layered with lowered growls that come in as accents.

The first song is vicious enough to stun you, so by the second song I have to ask the question I ask every band "You are Heavy but can you write songs?" The vocals are spewed in a similar manner,. This is what creates a somewhat uniform sound along with the temp they play at. Thankfully going into the solo section midway into the second song they slow down and give me the nuance I need without losing much momentum. "Haram" is even faster. At a minute and a half they begin to craft more of song than just anger alone. You can make black metal hate again , but it also needs to have dynamics and depth. They begin to bring that midway into the song with a darker more experimental ritualistic side. This makes the build back up more intense. The vocals begin to sound more demonic at this point. There is an acoustic interlude after this song that I think could have been better served worked into a song.

They really deliver what I want on "Al-masih ad Dajjal" which works with more of a pulsing throb. The verse slows down more like Incantation. Who is also a fair point of reference to who one of their influences might be as they are often in the same sonic zip code. They return to furious speed on "Prophetic Poison". It is not just a blur of blast beat and some thought was put into the song writing. That is not to say there are not blast beats, the song just doesn't rely on them alone. The slower more death metal touches to "Fitna" are welcome to break up the blitz that can wear you out over time. They close the album with an acoustic outro, which once again  I feel moments moments like these would be better invested in working into the actual songs to give them more range. If Tom Waits wrote a song for the demons in the Exorcist the result might be the same. I will give this album a 9, I think it shows they are to be taken seriously musically as it is not all just hate, but rather a good balance . This is coming out on Saturnal; Records in April.