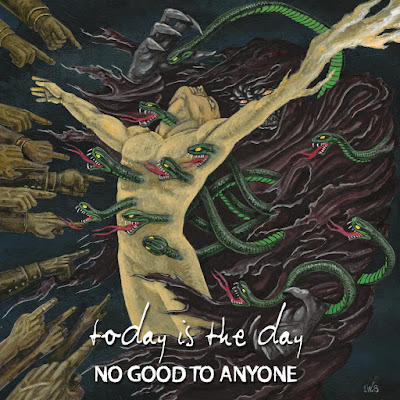 This one took time to digest then it clicked with me. It's both heavier and more melodic than previous releases though as expected these things meet at a weirds juncture. By heavier it's more an emotional heaviness than metallic heavy.  I jumped onboard with these guys in 1997 for "Temple of the Morning Star" , which is a weird beautiful album then after "In the Eyes of God" , I would listen to them when friends played them, but did not give another album a solid spin until "Animal Mother" . "Temple of the Morning Star is the bar with which I will measure this album since it's my favorite. The fact this album is as dark as it is , makes me want to dig back in a give the other ones that I missed more attention. The opener has more of a Melvins influence than I remember from Austin. "Attacked By An Angel" sets a different mood. It's like indie rock gone wrong. It's creepy with a backwoods despondence. I can imagine a serial killer listening to this album in his murder shack out in the middle of nowhere USA. Sonically the heavier moments fall some where between doom and sludge, though not all of the sounds stick to the heavy metal play book.

The deranged backwoods vibe continues on the syncopated . The bass tone on this one is pretty mean. Things begin to get back into his normal wheelhouse of spastic with "You're All Gonna Die".   There are a few interludes on this album that I am not factoring in for the purposes of this review. There is a nasty attitude to to the ebb and flow of "Cocobolo".  The psychedelic ballad "Callie" is pleasing to the ears , but not the album's most challenging song by far. "Oj Kush" is not the first song to use a very syncopated Helmet type stomp, this time around there is just a glaze of weirdness over it. He continues to sing in his less aggressive , almost timid Dinosaur Jr like voice on "Mercy". I am fine with this . Singing always makes a song more interesting than just screaming. I said just because sometimes a more aggressive vocal is needed and that unlike his past albums is not needed here. More of a lethargy coats "Born In Blood". It's like floating down a lazy river , but on bad acid that is depressing you.

The album continues to grow increasingly creepy . "Mexico" throbs with more of a stoner rock thing, if that is what we are calling say Kyuss. There is also kind of a Neil Young thing going on with the vocals here. It's been touched on throughout the album , but that feel is more pronounced here,. There is also kind of a grunge feel to what is pulsing here as well. Think Mudhoney not Pearl Jam there. The guitars kinda shimmer in the background.  The last song starts off with acoustic guitar and surreal sounds washing over it. I thought well this is his last chance to rock me like Amadeus . Instead he is getting high here. Which is fine, not what I expected. I have read review where they talk about neck straining screams, where are those, what album are those people listening to ? This is like some Ween shit hear, maybe if they were huffing fumes.He has mellowed with age. You get a great many people writing about what a rough go he has had of late, I think if that is the case it made him depressed not angry.   More of a lethargy coats "Born In Blood". It's like floating down a lazy river , but on bad acid that is depressing you. I will give this album a 9, I will grow on me, but if you came here expecting metal check else where.

Email ThisBlogThis!Share to TwitterShare to FacebookShare to Pinterest
Labels: 2020 album, 9, album review, no good to anyone, sludge, Today is the Day