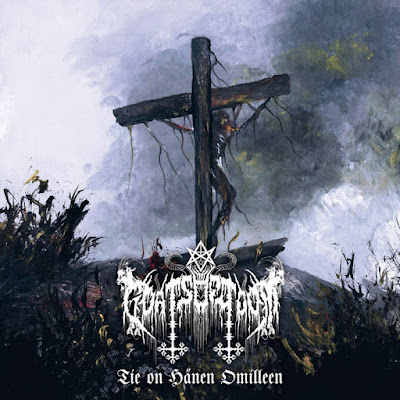 When I think of Finnish black metal I get ready for something really raw and feral like Horna. Here the guitars are given much more attention to deal. So much so it recalls classic metal of the 80s at times. The guitar harmonies are more Swedish than they are Finnish. This is further noted on the  second song , They really brings out a swing to the riffs that recalls earlier Dissection. The novelty of their Swedish sensibility begins to wear down by the the third song. It's too straight forard for me. The mid range rasp of the vocals which has a bratty sneer to them also wears thin by this point in the album.The vocals fall over the guitar where they need to though I can not say it feels like much thought was put into them.

The third song develops more of a gallop. They take on a more rowdy thrash sound and the vocals dig in with a deeper more death metal growl in places. All of which are needed to keep my interest. The fourth song gives more melodic accents though by this point the songs have begun to sound some what similar. Though they have to be doing something right as this month I am plowing through so many black metal bands that if it just sounds like everything else with little in the way of song writing I am skipping right past it.  The fifth song is more punk and has a sung viking like chant refrain to it as well as some blazing solos of the more traditional metal variety. More fun than it is grim. Party black metal?

The title track finds them getting too straight forward for my tastes. Almost more thrashing than black metal. The guitars have an almost pirate metal melody to them. They slow things down to a more deliberate pace for the opening riff of the last song. Thsi one does not find them doing anything new. The vocal are reverting back to their standard higher pitched snarl. I will round this down to an 8. In someways it has the more folk metal sound of the Istapp album. which I prefer to the more raw Finnish sound.