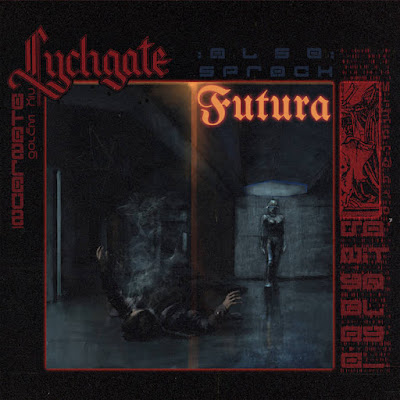 Since this is My blog, I make the rules.  For black metal history month, we do not have to just look at black metal past, but in doing so we might look at band's who have a black metal past, but evolved into other things. Such is the case with this band, though the album opens with a darker and more intense brooding than what I remember from the last album. Keyboards are playing a larger role. The vocals which are courtesy of Greg from Esoteric who also produced them album are more death metal. Things are still very angular and progressive. There is still enough black metal to what they do that would please fans of the gerne. There is an angular dissonance to the riffs allowing for atmosphere, Things speed up on the second song.

The opener was only three minutes and " Progeny of the Singularity" ia under six minutes which for black metal is like a pop song. There is not droning, they get to the point even with the weird ness. Sung chanted vocals surface on the second song as well. "Simulacrum" opens with eerie squealing sustained notes.Sung vocals follow this. It reminds me of a darker version of Cynic.The songs really simmers in it's moodiness rather than exploding though there are a few bursts that hit more like a storm front. There is a touch of free form jazz in the feeling the space these sounds create. The vocals are not as interesting as the music , but that can be part and parcel with more extreme genres at times , they do get more tormented in their screams as the song progresses.

There is a great deal to like about this album. The guitar playing is more progressive than the typically more tremolo picked than not black metal guitar sound.  There are great guitar tones on this album. The production is top notch. My only complaint is when I leave this album on and just let it play the songs begin to all sound the same. For this reason I am rounding it down to an 8.5, which still leaves this album as being among the best at least this month, This album is being released March 13th.