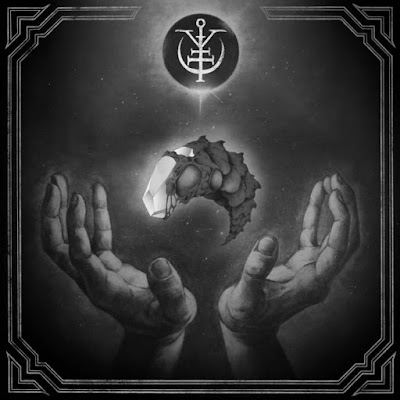 Unholy shit another one from France. They are dominating the future of black metal. I am just picking bands that sound interesting. The bulk of them will be European or American I am sure, as places like South America tend to just pump out raw black metal, which is really just feral thrash. The first song here is very nuanced  with no blast beats. It is also an instrumental. When the vocals come in a one the second song things go in a direction more like the status quo of black metal though this is offset by things like the odd productions choices in this mix and melancholy guitar passages. The vocals are a higher pitched snarl.  A lower death metal vocal does come in at a few places in the song. The throb of the title track puts more death metal vocals to use though the more black metal ones do come in, this really showcases some superb dynamics in their songwriting.

"Emerald Sphere" finds the atmosphere dialed up. One thing that makes these guys original is the sense of space these songs are given. Normally black metal keeps things so tight and dense you are almost claustrophobic. In some ways this recalls Immortal though when the riffs get to rocking there is less of a thrash sense to them and not going for such a big epic sound even when it all gets pulled back to together into a gallop.  A Third vocal color emerges here when the vocal are more shouted. i am a fan of the dark haunting melody that possesses the lingering first couple minutes of "Moonrise Lake". They set themselves apart from other French band's . It is atmospheric yet has nothing in common with Alcest. When they get heavier the owe nothing to Deathspell Omega. At the three and a half minute mark the actual song begins to kick in. A fourth vocal color brings life to this song. It is a throaty bellow that reminds me more of Alaric. Kind of give a slight crust tinge to the song. The riffs is more sludge than black metal but who cares it's so good.

I will round this album up to a 10. The strength of this band is breaking from convention to create a sound that is their own the closest comparison might be Samael  It will be hard to imagine ten more black metal album coming out this year that are better than than this one. I am not going to say this is going to be the best black metal album of the year , but I can only speculate this will be on the top 10 list. However we still have 10 more months , though history tells us at least a couple discoveries from this month make the list.