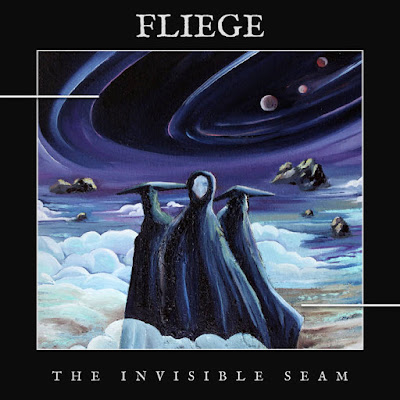 This Brooklyn trio is weird. They supposedly blend industrial with black metal. Just because you have a drum machine does not make you industrial. It just means you need a drummer. They do however blend an interesting array of sounds while having very mature guitar parts. The more emo like sung vocals were suspect.  On the first song there is enough atmosphere to blend everything. I am more invested in "A Confession"  than the previous song "Four Suns". The trade off from screamed vocals to sung vocals begins to click better for me. Real drums supplementing the programmed one would give this some heft.  "March of Whips" is black metal for people who normally listen to the Black Dahlia Murder. There are some catchy parts but I am not sure I am convinced. The "Strange Things " like synths going into "Love Plague" offer a deceptive start. For the record I am now always calling synth wave "Stranger Things" . There is some feral gnashing of teeth to juxtapose some more melodic moments.

There is more metal to the title track.; The vocals improve on this one at both ends of the spectrum. The guitars also make up for the lack of drums, If they were organic drums they would sound like Dissection. They do not work off tremolo picking or blast beats so it's a much more middle of the road and death metal infused brand of black metal. The drums that come in after the break down almost sound real until put next to the Stranger Things keyboards. The sung vocals work well though. The programmed drums could have worked better if the mix was more dialed in, instead when it falls flat is creates a great deal of sonic adversity for the rest of the song to overcome.  The vocals are trying really hard, The sung vocals are hit or miss, but the screamed one really mean it.

"the Censer" is more black metal, but it also really doesn't move me to want to listen to it more. The last song finds at least the components of their song writing working and gives m a better Idea what they are capable of. I will have to round this down to an 8 do to the issues with the lack of drumming effect their over all sound. They have a great deal of potential that might be fully realized on their next album, but as it is there is still a great deal of cools songs, sounds and riffs being brough to the table on this one.