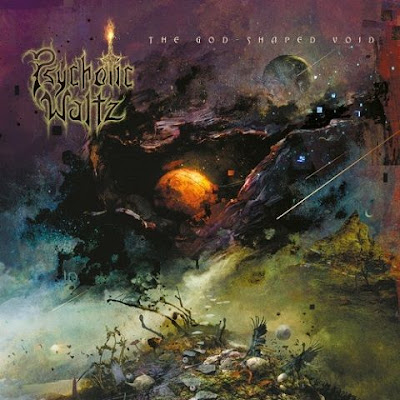 Aside from my obvious admiration for the likes of King Diamond and Iron Maiden, the bulk of the music covered here focuses on the darker more modern crop of bands .There are time to time reminders of the music I grew up listening to some of which falls closer to power metal like theses guys. What matters to me here is this is the same band that played on their "Into the Evenflow " album, which is all that really matters to me. My problem with most prog/power metal is that it is never dark enough. That has not been the case with this band which is why I have like them for some time. The melody on chorus to the second song "Stranded"  is the only time I hear any of that flowery Journey like pageantry that you typically associate with bands like Dream Theater. They do come back with some bite after this. Their guitar solos are not just mindless shredding but a well restrained return to melody.

Lyrically there is s bit of sci fi with portals being opened. "Back to Black" took a few listens before it really clicked with me. The riffs are not as hooky as they have been in the past. There is more groove and hook to "All the Bad Men". It's groove is more deliberate and works well with the vocal melody.
There is more of a power ballad like feel to "the Fallen" that doesn't work as well as the previous song's stronger melody. For another band it would work just fine , for what these guys are capable of it feels a little dialed in. Acoustic guitar opens "While the Spiders Spin" . It builds up into something with more of a classic 80s metal feel to it. The groove and the melody are less arena rock .  The chorus to this song might be the album's strongest. It has a little touch of Queensryche to it. "Pull the String" finds them marrying alternative prog metal with more of a stomp. The song oddly shifts into a more Sabbath like section, which for most metal bands is not that odd, but these guys typically do not fall along those lines. Grave's flute playing surfaces on " Demystified". which has a more prog like flow.

"Sisters of the Dawn "  finds Devon adding more grit to his voice that I can recall hearing from him. It is also the first time I have herd his age seeping through when he goes into his upper register that doesn't hold the power it once did,. He is 53 so it's no unheard of . The last song has a blend of tension of tension and atmosphere that might not be the album's most compelling moment but works. I will give this album a 9 . It is not "Into the Even Flow" but pretty solid. Fans of this band will embrace this.