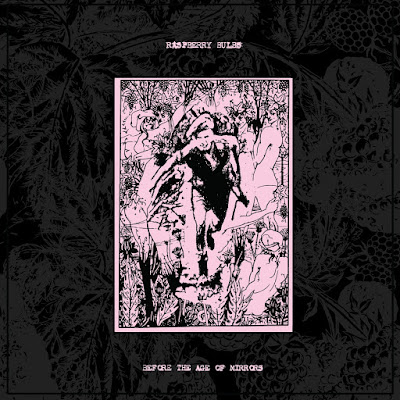 Part of my duty here is to be the gate keeper and call out claims made by the rest of the music press trying to tow the part line . What is black metal and what is not is an important aspect of this month and upholding the legacy of black metal. The claim is these guys are black metal. Is this true ? This is not our first time with this band and I do not think their name is any less stupid than the first time I heard them., They seem a little darker . The production is still very rough and punk,. I like how the under current of black metal is being blended here. The vocals have a snarl , but are not just unintelligible screaming. "They're After Me"  is pretty much straight up punk with a rough edge to it thanks to the vocals.

There is a clanging menace to "Missing Teeth". The guitar jangle enough to keep it punk , the vocals are the only thing that leans towards black metal on this one.  The vocals fall further back in the mix. There is metallic intent in some of the punchy progressions , but it is not a metal song. More punk than Darkthrone's punk albums.The guitar to "Doggerel" is upbeat and feels happy to me, which are things black metal is not It does get darker as the song progresses, but while black metal is frequently much more than just up tempo it should never find it's mood upbeat or even hopeful. They take a darker turn going into "Midnight Line"  There is a great deal of feed back.The guitar tone is over all punk and not as overdriven as the feed back might suggest. There is a melodic touch to "Reclaimed Church". There is more of a rock n roll feel to this song, but also to this album as a whole.

This album is littered with interludes various creepy bits of atmosphere that are likely the most black metal thing about this album. "Given Over to History" is one of the album's more interesting songs, I would be more ok with this not being black metal if they had more moments like this, This album is not black metal as claimed, but is better than I expected , it's a pretty solid punk album I will give it an 8.5. sed on Relapse Records