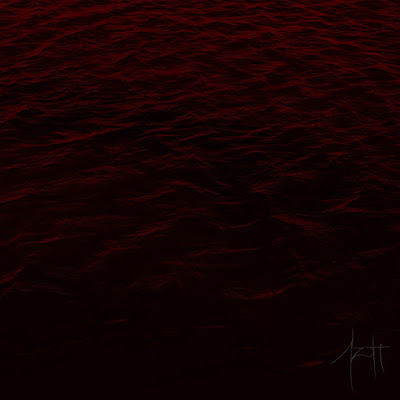 When this band hits you with blast beats it is because they have already massaged your ears. You have something to contrast it with. They are from Portland they new hipster capital. Hipsters no longer listen to black metal. It's too 2012 for them. They are now into industrial. These guys do create a cascadian drone. What is in the water of the Pacific Northwest that makes them lean that way, or better yet what is in the weed might be a better question. They are able to step away from the blast beat to soothe you with post rock for a little bit before raging back into blackness. Fell Voice's earlier work is a good reference point for where they are at in their sonic escapades.

It is not until the third song t hat vocals come in. They are a very distant and almost whispered rasp. Like the ghost of an old dying man is crying out. It could be production choices but it doesn't sound like there is a great deal of power behind them. Perhaps this is why they waited three songs in for them. Most American post- black metal bands will be influenced by Deafheaven at this point. If they are it's not obvious aside from the fact they are in the same sub-genre. More intense that the more recent Deafheaven for sure. The vocals play less of a role. The ebb and flow between their two polarities is not predictable  Sometimes they are darker than others. Solemn and moody are two words better coloring them than dark. The clean guitar tones really shimmer. The title track is almost more of an interlude. It floats around in  pretty places.

"Seabringer" close out the album  This song finds the band back in a more dense and intense place. There are lots of blast beats here , but it is balanced out by the stirring atmosphere. There is dynamic range , but the frequency of defaulting to blast beats to convey the feeling of black metal does begin to give the songs a more uniform sound. All the same the sound might be stronger than the songs, but this was a listen I enjoyed over all I will give this an 8.5 as I think it was a success in what they set out to craft.