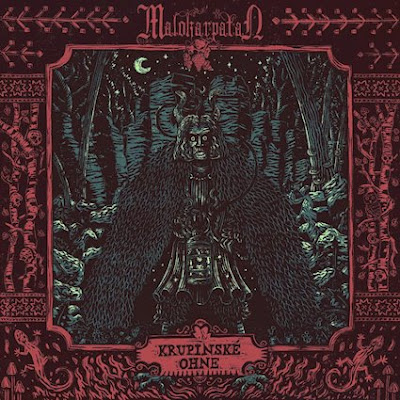 Slovokian Black metal is a thing and based off this album it mixes the gothic touches of low budget 70s British occult horror movies with black metal. It is raw and progressive at the same time, which should please a wider range of metal fans than if this was just another blast fest.  The chugged guitar is equal parts Mercyful Fate and Judas Priest. The vocals are a low reverb buried growl. The use of clean guitar thrown in amid what might be the verse is different and these guys are not slaves to any formula.  It ends wit ha more folk inflected mood. The second song has a more classic metal attack to it. The snarl of the vocals are the only thing really rooting it in what is black metal by today;'standard though this does sound like a long lost black metal album from the late 80s. Midway into the song there is a more melodic break to add atmosphere but it kind of feels like it comes from out of nowhere.

The third song opens with spacey synths. When it kicks in there is more of a death metal aggression. This finds them more in your face than the first two songs with a galloping riff the only thing that maintains the continuity to their sound aside from the vocals .If there is any formula to what they do it can be found in the folk break in the middle of the song. The synth wave like retro synths that open the fourth song create a darker creepier atmosphere more in line with the horror movie like ,ood we heard on the first song. They have a more conventional black metal feel here. They still do not indulge in blast beats even when it speeds up there is more of a Sodom feel.  There are some single note guitar lines , but these guys are not big on blazing guitar solos either.

The album closes with it's most modern moment. The clean almost post rock like guitar line is very smooth. They do erupt back into the bigger metallic chug they seem to love. They also break away from the rasp into something a little more sung as the song progresses into the three and a half minute mark. Their native tongue doesn't not lend it's self to the hookiest of melodies. I give this one a 9, despite the fact it's not the strongest song writing we have heard from a black metal band this year, they are however doing something that stands out from the pack and gallops down their own dark parth.