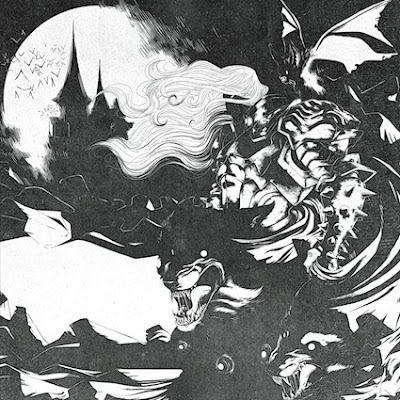 This is the first album from this band, but their resume includes Satanic Warmaster and Horna, so you know what you are getting into going into this album. I respect both of thoe bands , but they typically tend to fall into the more raw than I like category of black metal, which is common with the Finnish scene they come from. This album might start off that way be is more textured nuance and better produced than what I expected from them going into this. The first song has synths going into it that softens the sound a little, but it is pretty much a very straight forward black beaten second wave black metal sound. The vocals are more forward in the mix and do not feel like an after thought. They are a mid range raspy snarl. :Thy Deviant" kind of bores me as it just drones on the same blasting riff. "Spellbound is marginally better. The ritualistic same intro sets a better stage. The vocal doubling also provides another needed texture. I think sometimes blast beat when this frantic can feel like they are rushing a song in a more punk manner.

"Chi No Namid" finds things changing in the best way possible for them,. Granted the keyboards play a bigger role, but the slow down and let the song breath. This trend continues on the song that follows which goes in an almost Dimmu like direction with the symphonic elements.  They are not as mean, but they are better songs and give me more of a desire to listen to them more than once. "In the Witch of my Heart " has a very Bathory sound to it . This is no surprise since Bathory and Venom are the two bands mowst influential to this brand of black metal though you can hear some Mercyful Fate in the theatrics of how the earlier songs are set up.

It's funny that I just mentioned Venom because that is exactly where this goes on the last song. It has that very rock n roll feel. This album is a great deal better than I though it would be going into it. It is not that dark, perhaps a litle darker than most metal since it is black metal, but more straight forward and less dark than my tastes . Though it 's pretty fun and well done I will round it down to an 8.5 whihc is likely as high as I have ever given a Horna album,. Thos comes out February 28th on Werewolf Records.