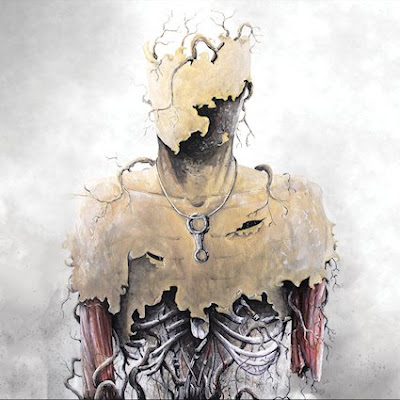 France was killing it around 2011 when it came to black metal.  Not so much these days though perhaps I am not digging hard enough for it , or it is not the right kind. Labelled as post-black metal, These guys get props for not only not sounding like Alcest or Deathspell, but they are not trying to cop anything from Deafheaven either. In fact the label is a bit of a misnomer. There are some moments of breathing room, but nothing gazey about this in fact it's pretty aggressive. This is the trio's second album. It is really well produced. The songs are focused so the ambient sections are not wandering off. "L'Echo" balances the syncopated pounding with single note guitar sonics. The way the breakdown section floats off on this song is the first thing that really puts them in Deafheaven's zip code.

There is a more feral explosion with "L'infime" . The guitars are well layered. It creates a sonic intensity. While they do not sound like Deafheaven they take some of the sonic elements I like about "Roads to Judah"and come at them from another angle that is not a blast beat heavy in terms of black metal, but smarter songwriting.  This is not to say the album is devoid of blast beats as they are there. They do not live and breathe them, making their use of them more effective. This is one of the first albums of this kind that I've been into in a couple years as last year did not have much in terms of this breed of black metal . "L'instinct" is the first song that is mainly due to the blazing drums and while impressive double bass more o a straight up metal thing that doesn't connect as fully with me .  However when they slow things down and allow for more breathing room it works.

" L"energie" is more deliberate. There is a darker side to the atmosphere though midway into the song it gets more full blast ahead.  This mood continues on the following song ,though it is more straight forward in a more metallic manner, The closing song has more swing to it and gives things more of a groove, though the screamed vocals come off as a feral rant in their native tongue. I will round this album up to a 9 as the songs are not just a blizted out blur of heavy. There is thought and dynamics put into them .