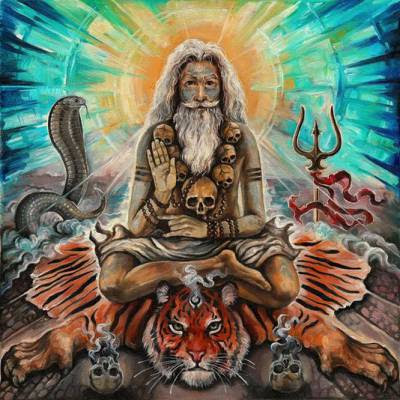 I am not sold on the whole Buddhist black metal thing, but simply calling it that is over simplifying things I am sure. They are typically good at what they do so I am for giving this a shot. The first song opens with weird ritualistic ambiance before they blast into things. When it comes to the metallic side of what they do , the truth is they are pretty straight forward a less thrash inspired version of Immortal with more snarl and less croak to the vocals. Dressing the songs up with the more ritualistic trappins is their schtick. Here is the crux many band's face, being true to the sounds of their chosen genre, while carving out a sound that is original. My first impression is that I like their 2013 these guys better. They open the second song  with a creeping tension that is darker thus helping them to if not for a moment step away from the perceived problem of their own sound I mentioned earlier. When we get to "(ne)cisty" the opening riff sounds like something from Death Angel's "the Ultraviolence" album. That is before the blast beats come in.

"Harhar MahaDev" is pretty much color by numbers black metal and the only color they are using is black. They sound angry enough to the whole Buddhist  thing must not be working. They keep at the same speed for the first two minutes. They meditate for a few minutes then are back at it again. The title track of the first disk almost sounds like the first track from the second disk, the only difference being the first song from the second disk has little flutes over it to create more of  folk metal atmosphere. They keep blasting away and the songs begin to sound the same.  All of the songs on the second disk are entitled "Buddha" so it's the second one of these that at first seems like it will buck some of the more atypical black metal stylings in favor of a perhaps more classic metal sound, but the need for speed is too great. Two minutes in however they break down into a more melodic direction.

When they slow down and gallop into a more deliberate victory the results are much better. This does not last long before the blast beats once again become their default. It's not until the third song on the second disk that we get something different and more melodic. But how long can it last? ABout as long as their other songs. The last song sounds pretty much like all the others. I will give this album a 7.5 as it all begins to sound the same,. They are good at churning out this sound, but this sound is a little too monochrome and previous releases have shown they have a capacity to do more.