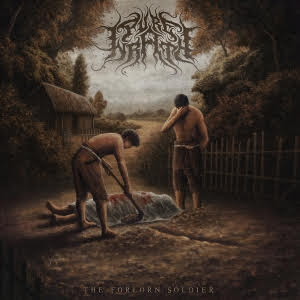 Giving a project not from Europe or America a chance. This one is from Indonesia. Speed is their thing. It is not the darkest thing I have heard and the symphonic elements do keep it from just being a blast fest. The vocals sound like the most blackened part of this. It kind of goes to show how black metal is more of a feeling the sound brings that just a sound the guitar buzz with tremolo so the notes are being played in a way a black metal band would execute them. The piano parts are cool and the chanted vocals work for me as well, despite feeling this just doesn't sit where I would put black metal. Lyrically this is about a genocide that occured in the 60s. So political matters take away from the darkness when it comes to the energy being places as it plants their consciousness in the physical world.

Symphonic blackened death metal might be a fair assessment. The sounds do cascade with the sweeping swathes of orchestrated synths. The drummer from White Ward , who are an actual black metal band, plays on this though the drums are fairly low in the mix. The vocals are a dry throaty rasp  higher pitched the majority of the time. Six minutes into the second song there is a melodic break of clean guitar before it explodes back into it's metallic venom. Here is one train of though about the album. I find ever your write about something you are not a personal part of there is a detachment. The fantasy lyrics of a great deal of power metal creates this detachment . None of these guys were alive in the 60s. They are just reflecting from a history book, which might as well be fantasy as history is written by the victors. Thus this detachment can be felt. How angry can you be about something that happened 60 years ago?

The songs begin to sound the same by the time we get to the last song. The chanted vocals return and there are no new elements introduced. It felt like a continuation of the previous song. Things are well played and sounds great from a production stand point, though the drums are a little lost in the mix and it could use more thunder to make it heavier.  I think they succeeded in what they set out to do here even if what they are doing is not making the greatest case for black metal not from europe. If they had committed more to the death metal side this could have been the strongest death metal album so far this year , but instead we are trying to occupy the sonic space of black metal. I will give it an 8 for all of those reasons.   This is being  released March 6th on Debemur Morti.