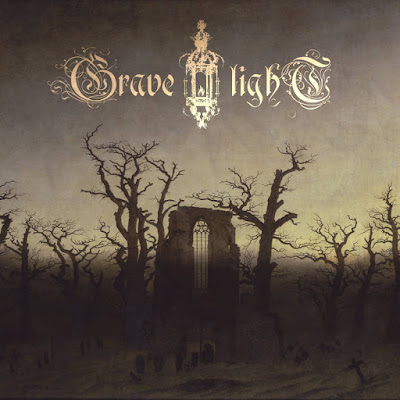 Dark and melodic with unsettling shrieks for vocals that remind me of Weakling. From Portland these guys are likely hip enough to be aware of the sonic scope they might share with another big American atmospheric black metal band. The vocals have some interesting layers when the song kicks in. Some of the layers are sung. The dissonance creates sounds in the vein of  An Autumn For Crippled Children with the show gazing texture. They tread closer to more expected realms of black metal on the second song yet keep enough of the original sounds they presented in the opener to not become a clone of the band whose name I am not going to mention in t his review .

The female sung vocal offsetting the scream is a great dynamic. The mix is not the best as the drums get a little buried on this song. They keep the kind of tension the blast beat bands do without having to resort to them. This is not to say the album is devoid of all blast beats they just do not have to hit you with them in great succession. "Cursed to Loneliness" breaks this trend and finds them multiplying. The melodic moments bring out the special side of their sound on "Here After". If you do not yet have a barometer where these guys are falling in terms of heaviness, then know they are never just heavy for the sake of being heavy it works as an explosive dynamic amid the beauty here/

The last song is an instrumental. It was going to be a hard sell for me as the vocals are some of the more unique elements to this band.  The guitar playing is very tasteful and I am impressed this just doesn't become a post rock thing. It also feels more like an outro than a song as it stays in one place and wanders in circles even there. The guitar solo is Pink Floydy. There is the sound of birds cawing, but that doesn't make it a song. I will give this one an 8.5, The production is spotty in the drum mix, but I look forward to hearing more from this duo as they are onto something good here.