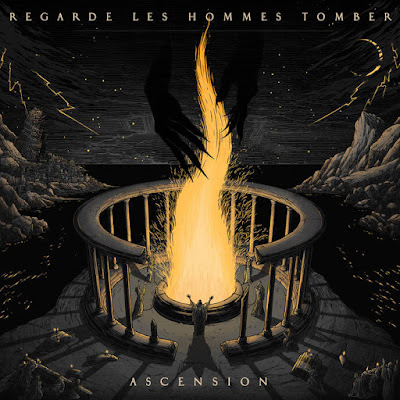 I have had my eye on this album all month but just now giving it a spin. These guys are angry as fuck, but did not forget that black metal needs some atmosphere. They approach this equation with a great deal of experimentation, but all in  context of songwriting and not just pulling shit out from under their bullet belts for no reason. If we are going to compare them to another French band Death Spell Omega, is the best fit. These guys do not get into odd time signatures . They throw a great deal at you , but do not jerk you around in so doing. There is a dark dissonance to their sound.There is a lower Behemoth like growl to  "the Renegade Son". It  is more emotive than what Nergal does and delivered in such a way it helps me believe these guys mean what they are doing here.  It's even more impressive than the opener.

These guys are capable of cranking out blast beats, but do not let themselves become limited to that. "the Crowning" rumbles out of the previous song. This happens in a manner than makes it hard to tell the two songs apart until we get about 2 and a half minutes into this one and I notice the guitars changing . Past the midway mark the song shifts so the difference between the two songs is even more noticeable This album is really well recorded . It's dense, but you can hear all the notes the guitars are playing rather than it just becoming one blurring buzz. . "Stellar Cross" has a colder feel . The atmosphere going into it is more chilling. They melody rings out in the verse riff. This requires for them to dial back the attack slightly, but it pays off. There is a more sung vocals that comes across more as a moan.

There is a two and a half minute ambient interlude, before they come back racing into the last song. I heard these guys compared to Abigail Williams. This was by someone who does not either hear or understand the current of egregore when it comes to the places music is created. These guys sound French while Abigail Williams sounds more American. In layman's terms there is more of a rock n roll root to the energy of the latter's music. This is why black metal works best when it comes from Europe. It rides tension, butt the last song is pretty standard fare ion comparison to the more nuanced song writing found earlier in the album, I will give this one a 9 making it perhaps the second best black metal album in a month of listening to black metal albums, which certainly says something out the quality of what these guys are doing.