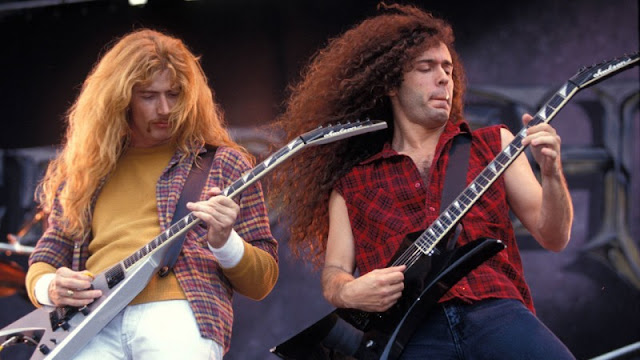 Known for theatrical performances , his tight playing style and clean picking always finds the melody to compensate for the rough vocals. His band has so much going on that over playing would be a detriment.

The best industrial player, as he can pull out thrash riffs as solid as anyone's and color them with the kinds of melodic embellishments needed to give the vocals the back drop they need. Playing with as many electronic elements as he does , you can set you clock to this guys playing. He is a machine.

Playing in what became like a black metal version of Mr. Bungle, Shinichi's playing ranged from a more classic rock n roll to lots of wild Hungarian minor scales. He added a human component in his playing to what would otherwise turned into a chaotic circus of wild gymnastics.

Funeral doom can sometimes focus more on the atmosphere than the chops, though a great guitarist can always breathe life into a song despite the trappings of a genre and work within those to still shine. Hector is a prime example of this. He can fire out a solo with enough tasteful shred in it to satisfy any moody metal head. It's his almost jazz like approach that is the most appealing part of his playing.

This guy came out of the trash scene inn the late 80s early 90s but his playing was way ahead of it's time, much like his band. His solos retained the dark mood of the songs and were full of melodies , I can sing them all in my head. Then the singer died and never heard from him again.

His dark and dynamic playing was more impressive to me in his first band than this current band. He does however prove himself to be just a capable playing blackened death metal as he was swamp sludge that was haunted by the ghost of the Doors. The few solos on those his early work had a rock n roll slant and a touch of wah.


His playing pretty much made the "Rust In Peace" album. He blended all the neo classical non-sense that Yngwie did into something more fluid that worked better in a metal context, than just using boring 80's gallops. Granted he had Dave Mustaine to work off of.


The thing I like about depressive black metal is the range of emotion. His playing embodies this. He remains tasteful at all times even when his solos go from delicate melodies to ripping your face off, in a band who dynamics is their stock and trade he honors this and is always a part of the song writing process rather than just seeing the song as something that bookends a guitar solo.

Next time I run into Brent he will probably say "Hey man what's up? How's your daughter, we need to jam again sometime, listen man if you weren't so big I would slap you up side your head for putting me on a god damn metal list. Yeah... I know we listened to a bunch of Dio that night I did cocaine off your ferret's cage, but I am a blues guitarist from Alabama. I'm not like those dudes in Meshuggah." But his band put out metal albums and he plays well so here he is. He made it this high because he has a unique finger picking style.

He used to play in a death metal band, but they gradually got more progressive until their music can now summon elves from the future. Listen to the song below and then if you think he doesn't belong where he is then you do not know anything about anything so who cares what you think about this list or any other subject.