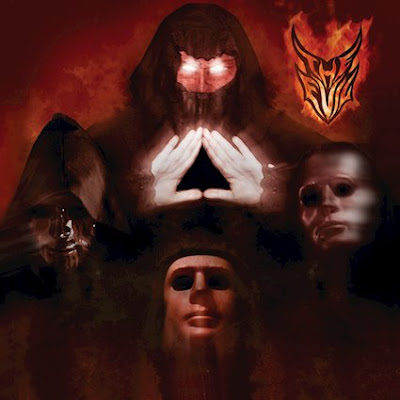 This band from Brazil is darker and heavier than most of the female fronted stoner/doom bands that pass through my in-box. Granted she has a masculine voice in some sense, if we are talking about a man with a feminine voice...think Rob Halford styled power metal here. So while this does give them a late 80s doom sound the fact the guitar is so dense brings if up into this decade. The bass tone is pretty 80s though. "Screams" finds their groove getting murkier and the sludge heavy guitar tone not pulling the weight by itself. Doesn't suck but doesn't grab my attention like the first song. "Sacrifice to the Evil" has more of a cheesy Halloween sound to it with some "Omen" style chanting. I guess it makes about as much sense as some of Acid Witch's stuff, but Acid Witch gels better thematically.

They trudge on with "Satan 2 " I guess this a sequel. Not sure where they lyric "from Russia with love/ comes in " ?   With doom or really any genre the challenge is to be your self, but bring something new to the table .With black metal the problem is blast beats begin to sound the same. With doom it's recycling the Sabbath chug. Think of it like warming up a piece of day old pizza in the microwave. The first time you nuke it, the pizza will still be worth eating. The second time , it's going to be either soggy or like rubber. This is what happens on "Sliver Razor". I can only taste the rubbery aftermath and not what worked on the first song.

They give "Ancients" a little more breathing room, it follows a similar formula as the song "Black Sabbath" by the band of the same name, you may or may not have heard of them. This brings us to doom rule number 1 " a little Black Sabbath worship goes a long way". Now these kids are not breaking this rule as bad as many bands. The fact the vocals are not going all Ozzy certainly helps. I would just like to hear them pull from more colors of influence. I am beginning to hear people already calling albums the album of the year and it's not June yet. This is not bad but I am giving it a 7.5 so it's safe to say it's not going to make my 10 doom albums of the year list. If you like things that are as dark as Acid Witch , but more doom than death metal then it might be worth your time.