CHRCH : "Light Will Consume Us All" 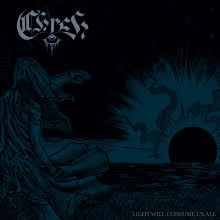 Twenty minute opening songs tend to piss me off. This one could have had the first 5 minutes shaved off as it takes that long for them to break out of the drone and get down to business. This waste of time is a shame because the Sacramento trio has their sound dialed in for their 2nd full length. The female vocals have a crusty touch to them. Riff wise They play off the same theme. The vocals become a nastier scowl the more this song builds. At the 13 minute mark it ebbs back down for her to lightly sing over. This part drags on for longer than need be as well and could have shaved another 3 minutes off this song. That would have made this a more compelling 12 minute song. The guitar solos are well done, but also get a little on the jammy side.

They throw some pretty weighty sludge on you with "Portals". In fact it reminds me a little of King Woman. The difference being the vocals here sound really good over the guitar. This band creates cool sounds where King Woman writes cool songs. The hypnotic elements are easy to get lost in. To the point you can't tell where you are at in the song. They cross the line from sludge to doom on the last song "Aether". If you don't know how that is done, the answer is ...adding a more mournful or morose interval. Adding a darker or more sinister tone can work to like Black Sabbath did when they added the tri-tone. Though Black Sabbath was never just a doom band. It's done hear and it almost become more of a funeral doom due to how lethargic and dramatic things get. The vocals become a more faint layer. The guitar is beautiful on this song, though I wish the vocals contributed more to the meat of the song. Midway into the song the screamed vocals work pretty well. They come even more to the forefront for a black metal tinged part when things speed way up.

The last song pretty much tipped the balance for this album, so I am giving it an 8. These kids have a ton of potential and they are almost to that King Woman or Pall Bearer level, the songs just need a little more fine tuning and less drone off a riff type of thing, that I am not singling these guys out for as it often comes with the genre, I think they can exceed expectations so I am not going to just lump them in with the hundreds of other sludge bands in my in-box.