Thou : "the House Primordial" 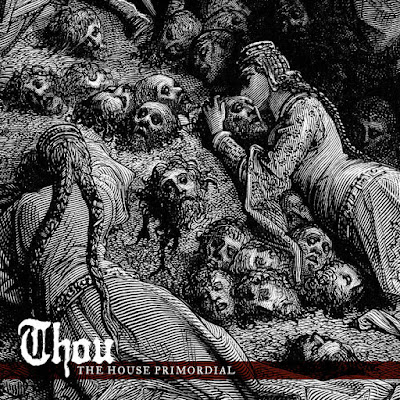 They are doing some interesting things here. The more detached guitar as the vocals spew their nastiness over it. It does bleed into the second song in a way that I had to look up from the computer to see how long the first song was , only to find It was on the next song. This could mean they have a uniform sound, but I am going to give them the benefit of the doubt and think this is a one time occurrence. This album is more atmospheric than the burly crunch of the sludge I remember coming from them. Almost to the point that some songs are barely there. This makes "Diaphanous Shift" what I consider to be the second actual song and it does have that blown out massive crunch of sludge they are known for. The minor triplets that manage snake out from under the crushing collapse of distortion give a more metal feel, making it almost like if Eyehategod was less punk.

The feed back and sludge lead into the almost doom ridden sludge of "Psychic Dominance".
Of the first three actual songs, this one might be the least melodic though they are droning out some chords behind the screaming and the plod of drums. It's loud and powerful, but more dynamically flat. They stick to the trend of making every other song ambient noise. I fast forward though them so see if any music happens and then delete. I only review music here so that is what you are getting. The screaming set against the wall of distortion on "Occulting Light" threatens how music might be defined as it spits in the eye of melody and work more of the apocalyptic rumble.

They close the album with "Malignant Horror" I guess this album is getting my ears tuned up to review the new album from the Body that is sitting in my in-box. The first two songs are really good and the rest of the album is really heavy. Once again they latch onto heaviness without committing to writing an actual song. They have some good sounds and it's disappointing that they did not live up to the promise of the first two songs, but if you need heavy as fuck then this is for you I'll give it a 6.5.