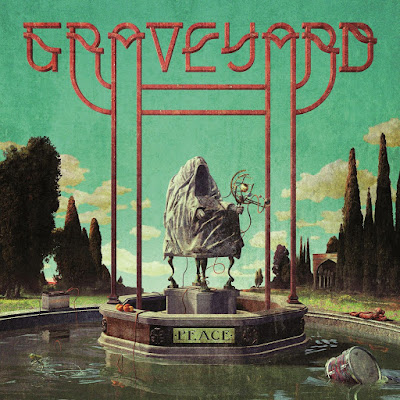 My first thought when cranking the new album from this Swedish band is I don't remember the vocals being this AC/DC in the past.It's their 5th album so they have a go idea of who they are and what they want to do. The more chilled out stoned vocals are still around. They just come from the corners of the first song to accent things. "Cold Love" is a more deliberate blues soaked number that reminds me more of a less jammy version of Govt Mule. The breezy ballad "See the Day" strikes me as more of an interlude than a full on song. There is more of a harder edge to the smooth 70s rock of  "Please Don't " that finds them taking the mood of the album down a dirty road blending Thin Lizzy with Corrosion of Conformity. They stay on this for several songs. Some of the over driven guitar solos have a warm retro tube feel to them and the grooves seem genuine, but begin to run together. The jammed bridge on "Walk On" works well and would transition to the stage effectively though the dynamics begin to grow a little flat.

"Del Manic" is like if Queens of the Stoneage decided to cover the Doors during one of the session with Mark Lanegan singing for them. Then there is Jimi Hendrix vibe mixing with Cream on " Bird of Paradise". This is not even hard rock, but it captures the feel of the time period they have been paying tribute to and do it in a manner that proves they mean what they are playing. This conviction in their belief of their sound is hard to argue against. They close the album with more retro blues boogie. These guys do a damn good job capturing the spirit they are after , even if this is far from the most original thing we have heard.

I am split on this, but I feel the score I have to give it is more of a reflection as to what I need in my life. I have already heard much of what goes down here. So for that reason I will give this album a 7.5. It's very well done and they succeeded in what they set out to do. I just don't need what they set out to do as I have already been here and done that. Perhaps you are 16 years old and have not then you might finds this more impressive than I do.