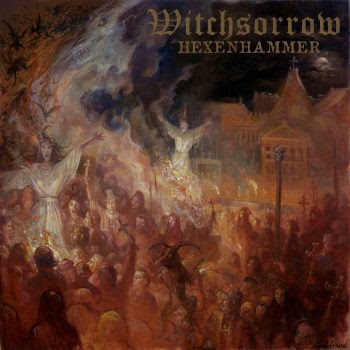 In the first few notes I can tell this British Doom trio is benefiting from better production value, as the guitar has a denser punch. Sonically this time around they have more in common with Electric Wizard's earlier stuff.The vocals have more grit are not worshiping Ozzy from the 70's. More aggressive than mournful, yet this still qualifies as doom, though any more angry and it would be sludge. "the Devil's Throne" is too upbeat to be doom and takes you back to more of a Diamond Head form of proto-thrash. They begin to remind me of post-"Nothing Face " Voivod.  There is a more foreboding pound going into the lumbering mass that is "Demons of the Mind" . When it gets into the thick of the song it's marginally more melodic than what they have done up to this point.

The chug to "Eternal" is much more convincing. Perhaps the highest point of the album so far, even if the vocals seem a little dialed in. "the Parish" is not bad , however it doesn't go above and beyond to set itself apart either. There is a little more breathing room in certain parts of the song. They close the album with "Like Sisyphus". This song does carry a rather heavy stomp to it, but it seems to lack the melodic touches that have found the band growing into a somewhat new direction. The more blast beaten section at the end of this song seems like not in line with what this band does best which is not black metal. So the acceleration of this song seems unneeded.

I'll round this down to an 8. It' an improvement in the overall sound of the band. The singer has more command over his voice and the songs are more focused. I think the more mid-tempo moments are the most powerful and this album comes across as being their heaviest and most melodic yet. I think the song writing is what needs more fine tuning as it starts strong and then heading into the last two songs loses the refined power that made the front end of the album work so well. If you want Electric Wizard to have more of a High on Fire thrashing anger to them then this is for you.