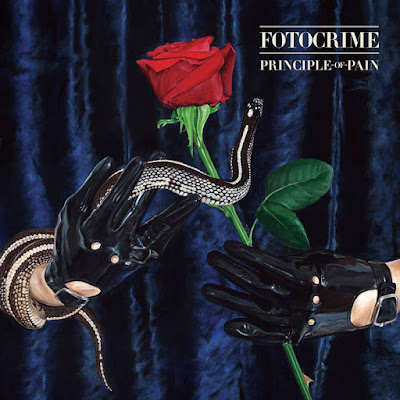 The first thing I notice by the debut full length is that production wise it sits on the slicker side of the 80's than the Bat Cave, so think more Billy Idol than Christian Death. There is more of a new wave feeling to the more Depeche Mode like groove of " Love In a Dark Time". There are also hints of New Model Army in the vocals, though this reminds me more of the dark wave / future pop project Covenant when they take on a little less organic feel on the song "Don't Pity the Young" that follows. Thanks to the more plaintive vocal they stay in that place New Model Army was in when they first crossed over into the dark side on " the Rose and the Thorn", with more of the typical post-punk tension running with the guitar melody. They are doing a good job of replicating the sound they are going for. If you told me this album came out in 1985, I might be inclined to believe you if I didn't know who these are.

If you ever wondered what a more new wave version of Nick Cave might sound like that question is answered on "Autonoir". Here mood and groove are perfectly married and this becomes what I want them to give me more of . Just because this is what I want doesn't mean it's always going to be easy for them to hit that same spot. They give a shot on the song directly after this time including female vocals and it leans more in a dark wave direction that is not as convincing. There is a more rock slant put to the post-punk tension of " Enduring Chill". This goes back to the more New Model Army direction. The bass that drives "Infinite Hunger For Love" gives me an "Ah Ha Moment" where I realized the difference between what is different when a post-punk band does this and when a goth or death rock band does this and the answer is goth or death rock bands do it with more slink that makes it in turn darker. This song is good, but like many of these songs it could stand to be a shade darker.

There is more of a rock feel to "Confusing World". To their credit the bass has a more aggressive stomp to it that works well. The end the album with a more subdued tone on "the Soft Skin" . Overall this album has some strong moments, but is rather middle of the road when it comes to how deeply it delves into the darkness. I'll round it down to an 8.5 for that reason, but it is still an engaging listen and most people are a little more willing to compromise on the darkness than I am so those can round it up a little.