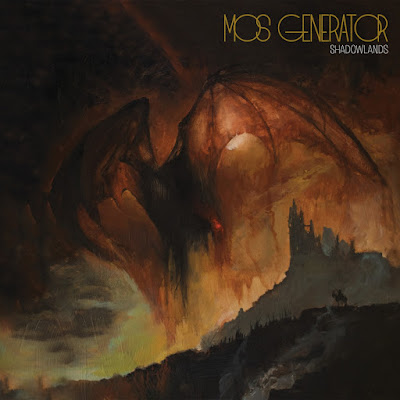 Not unlike the last Atomic Bitchwax album, there is a sense that another stoner rock band is growing up to want to be the Foo-fighters. The difference between this album an Atomic Bitchwax is admitted in the lyrics to the title track that opens the album where they sing "my heart is not too strong" so obviously these guys are not doing cocaine like Atomic Bitchwax. This makes their sound not as upbeat. But the 70s Thin Lizzy vibe is present amid the Grohlism. There is a more metallic tension to  "the Destroyer". The chorus doesn't have the arena rock hook power. But the rest of the song is there, was just anticipating something more FM. There is more of a proto -metal swagger to "Drowning In Your Loving Cup". I don't even drink and it makes me want to shotgun a beer in a Camaro. The guitar solo is fucking awesome. I don't even listen for guitar solos but this makes me want to shotgun one in a Camaro.

"Stolen Ages" must refer to the fact they just stole the riff from the previous song. The rest of the band did not get this memo and got really stoned instead and are just going to jam if you are cool with that. They almost go off into some Allman Brothers, but decide to rock out on that riff again. "Gamma Hydra" is too angular and happy for me. It almost sounds like King's X, though without all the Beatles harmonies. While is very driving, it doesn't feel like there is really much to "the Blasting Concept" though it is better than the song before it. The bass player really gets it before they go off into more of a jam. "Woman Song" is a little more upbeat in mood not pace . It's more of a boogie that leaves me waiting to see how big the chorus and it doesn't hit. There is a little shade of Sabbath, but it is not as heavy. There is a more melodic break where the melody changes that I like.

They really jam out the second half of "Wild & Gentle Dogs" . The guitar playing on this one has echoes of Pink Floyd at times.