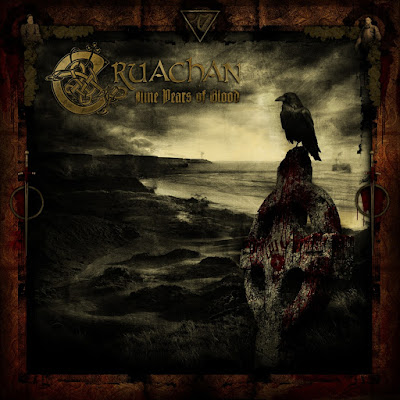 I think my thoughts on the folk metal have made a few things clear to most readers. Most of them can be summed up by saying I want to like it , but most of the time it's not dark enough for me. Last week we were going to the Renaissance Festival and folk metal was obviously needed for the trip down. So I downloaded this album and the new one by Heidevolk. The Heidevolk album was too happy. This one made the cut. The folk elements are blended into this Irish band's sound in a very fluid manner. Like most folk metal album their are a few little instrumental interludes that you have to sort through. These guys use harsher vocals and sung vocals. There guitar tone has balls to it and there is aggression that is not just LARPing. They do fall into a little more of a jig on "Blood & Victory" than I might prefer , though make up for it on the melodic break to some extent.

Lyrically these guys are pulling from the history books, makes the songs rather bardic. Lots of Irish pride going on here. When the fiddles are busting out more of a minor key melody, it works better for me though sometimes this is undone when they go into something that sounds more like a drinking song. "the Battle Of the Yellow Ford" has more scathing vocals on the verses , but doesn't strike me as inspired as the first few songs. While it has a commanding thrash gallop the folk melodies laid over  "Cath Na Brioscai" fall a little flat on me. "The Harp, the Lion, the Dragon and the Sword" has enough of thrashing energy to keeps it's momentum despite the happier touches of folk. Some songs grab me harder than others as it heads into the album's third act. The bands harder moments leaning closer to thrash than black metal. It is some of the more melodic touches that have the most impact.

"Back Home in Derry" closes the album. An odd choice considering how compact the song. It does show the two sides of the band and show the extremes of these two dynamics working together. It actually pretty catchy. This album runs into some of the genre's pitfalls , but is generally aggressive enough to thrash past them. I'll give this album an 8.