At the Gates : " To Drink From the Night Itself" 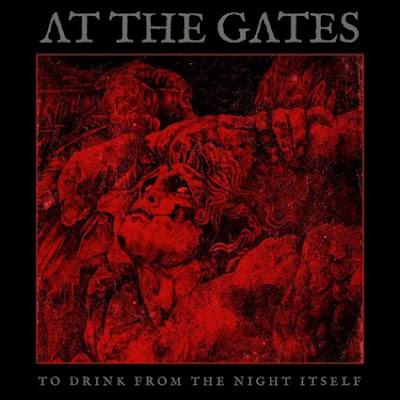 The Swedish Death Metal icons return with their sixth album which finds Lurking Fear guitarist Jonas Sthalhammar joining an otherwise close to original line up. They were so head of their time that rehashing where they have already ventured is going to sound like modern death metal. They always carried a thrashing slant to their brand of melodic death metal. "A Stare Bound in Stone" is not a dramatic shift from the title track that opens the album. The vocals stick to a pattern that is already predictable by the third song. I know what they are capable of so I want to hear the glimmers of adventure they might seek out to keep things fresh. It's going to be a well recorded album and the execution will be excellent when it comes to their technical proficiency. "Palace of Lepers" has a smoother groove before racing off at an almost hard core pace. It's hard not to nod your head to it.

There is an interesting melodic break in the otherwise aggressive "Daggers of Black Haze". The more straight forward bulldozing death metal of "the Chasm" is less interesting in it's one dimensional attack. Even on their more middle of the road moments the guitar is extremely well played . It's when they charge full speed ahead and forsake any gallop or groove that I feel they are passing up their potential. They come closer to reaching a balance on " In Nameless Sleep", but it's not as good as the first three songs. "the Colors of the Beast" benefits from a more deliberate pace.The vocals sound like there is more attention to details from a production stand point. They meet some where between the more melodic song writing sensibilities they have and keeping up the trashing speed of death metal on "A Labyrinth of Tombs".

They went into "Seas of Starvation" with a darker more melodic touch which is forsaken for the more typical thrashing they engage in. This begins to feel a little redundant by the time we get to "In Death They Shall Burn". It sounds like the are playing what one might learn as a riff  "in the style of " At the Gates. "the Mirror Black " might be the album's darkest and most melodic song.  Not their best album, but I will give it an 8.5 as it's well done and these guys still manage to be relevant. Century Media drops this on May 16.

Email ThisBlogThis!Share to TwitterShare to FacebookShare to Pinterest
Labels: " To Drink From the Night Itself", album review, At the Gates, century media, death metal, sweden