The Body : "I have fought against it, But I can't any longer" 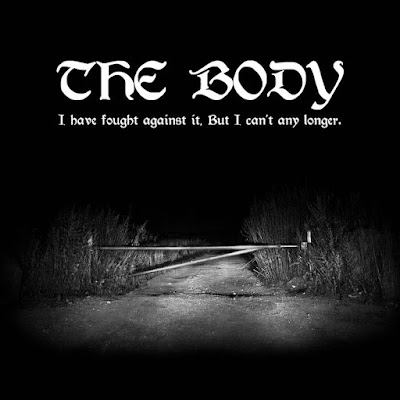 In recent years many musicians I respect have said they like this band when we turn to the subject of what albums they have been listening to of late. Their vocals have always been a sticking point for me. This album opens with dark melancholy atmosphere and female vocals that have a certain allure to them. This serves as more of an intro piece than a song unto it's self. The shrieking vocals I hate, begin to caterwaul against the ambiance going into the second song, though the female songs retain center stage. They are soaring and operate while the abrasive screams sounds like they are coming from a rape victim out on the street several stories below. The fact they are so far back in the mix, makes this my favorite thing I have heard from this project so far. On "Partly Alive" the squawking toucan being tortured they call vocals, is still mixed in a way that finds them fluttering in and out of focus due to what is a glitchy electronic trick. When the vocals are more yelled behind this it works for me. There is  an industrial apocalyptic build up on this song that works more as a drone.

Programmed beat and abrasive waves of over driven synth coast along the disemboweling of another tropical bird, but the brutality of this fine feathered fowl is obscured by the layering of the music around it. This is more industrial than metal, due to the fact it's not guitar driven. They still mange to keep my interest peaked, though it's more upbeat and less darkly menacing than the previous songs. The vocals sound more like Beaker from the Muppets  getting an unlubricated fisting. The female vocals come in a save the song. More pleasing snarled vocals that do not reflect a prostate pounding help build this into one of the album's first metallic moments. I can now say I have a favorite song by the Body. They begin to guide you further into this nightmare with what sounds like a distorted 808. This falls outside the bounds of industrial into the zip code of someone like Dj Shadow. The ear splitting shrieks, which unless aided by some kind of effect are executed at the exact same cadence and pitch on every song and every album I have heard so far . In my personal life I am a sadist and not a masochist, but the fact I continued to go back to their albums made me question this. A more vile black metal gurgled snarls emerges, another vocal color I prefer to the torture bird.

After almost a minute of blown out distortion they take you to a more punishing place that fans of this project might find most familiar. More electronics are layered over this to take a little of the sting out. The more anguished female vocals return and the percussion that's on a more organic battering that could come from an actual drum kit."Blessed, Alone" starts as a haunting piano ballad and finds sludge metal creeping up to over take it as the ballad continues underneath this roar. The vocals start off in strangled rasp that I prefer to the plucked feather plea of the screams that return. However I find myself being able to take it in the smaller doses this albums dishes them out at. The beat to "Sickly Heart of Sand" at first reminds me of something you might find on a Death Grips album until the song really kicks in. I would prefer the use of vocals other than those I already expressed my feelings on. I am recused by a few other angry shouted vocals both male and female.

The album ends with more of an spoken word outro that sounds like Bukowski doing a reading in a coffee shop.The lesson to learn here is I was not a fan of these guys in the least. This album might not find me wearing a The Body t-shirt this year, but shows a great deal of maturity and is not just noise and abrasion for the sake of that but songs that are crafted to paint a picture. It's the sonic equivalent to the hell world warehouse in Silent Hill.

Email ThisBlogThis!Share to TwitterShare to FacebookShare to Pinterest
Labels: "I have fought against it, 8.5, album review, But I can't any longer", sludge, the Body, thrill jockey, Uniform