Lychgate : " The Contagion in Nine Steps" 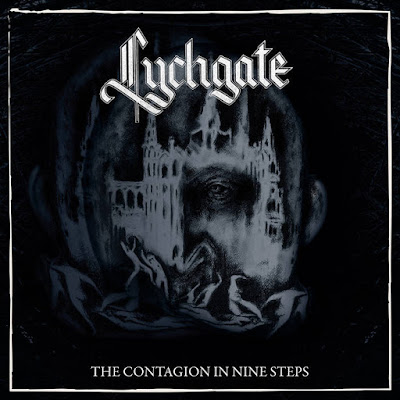 If  you showed up for black metal I can understand why this might be jarring. It's also really dark and interesting so if you don't recognize that and want just blast beats so eat more glue and chase it with a bullet. This is not to say I approve of every movement in this shifting landscape of angular chaos. I do approve of the sense of adventure and rebellion against the black metal status quo even at risk of not being black metal anymore. I think the atmosphere and melancholy of the first song make the angular math of the guitars more balanced and they get into some proggy abstraction on "Unity of Opposites" to the point that it might be too much like free-jazz for even Deathspell Omega fans, but they are doing their own thing so good for them, sometimes it works better than others. I am impressed by the variety of vocal colors on this album rather than just monochrome screaming.

Greg Chandler of Esoteric , who also made my Top 50 Metal Guitarists list, once again proves why he should be on such lists. This album finds more of a doom flavor seeping to the forefront where the first two albums were more black metal. "Atavistic Hypnosis" sounds more like Esoteric. Considering how long it's been since they have put out an album I'll take what I can get . The sung vocals are very powerful on this song , and one of the more effective uses of employing them. The guitars get almost Cynic like in the labyrinth they create. Things stay at a dissonant doom pace for "Hither Comes the Swarm". The double bass does come in to create a more hammering death metal tone. This is a concept album of sorts based on Stanislaw Lem's  book "the Invincible", but the lyrics are not dominating the songs in a way that continues to call your attention to this fact.

Low sung vocals narrate the beginning of "the Contagion" amid piano and spiraling runs of guitar. The higher clean vocals don't sit on this as smoothly and the growls work better. There is another heavier section that sounds more like death metal to me, and I can almost hear more traces of death metal on this album than black. Sometimes when you do wander you do get lost. "Remembrance" is like a transcendent doom ballad. Not as abstract or mathematical as the bulk of the album, and it's also not as heavy, almost like something Pallbearer might do. It's cool for what it is. Due to the sense of adventure that possesses this album I'll round it up to a 9 as when I am in more of a prog mood I could appreciate this more than halfway into my second cup of coffee.