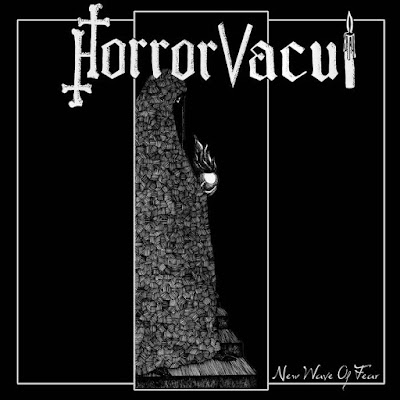 This was released April 15 with little buzz. I guess the death rock revival is not getting much hipster press these days and going back underground where it belongs. Fine with me as the music is better for it if judging by the opening track of this band from Italy's new album. The guitar tone lightens into a shade of gray on the title track. The vocals are really showing the most improvement moving down into almost a Sister's of Mercy like croon. The guitar mix is a little murky like the effects could stand to be slightly compressed. "Forward" finds the guitar riffs beginning to get a little uniform, thankfully they switch it up when the vocals come in . "We Are The Ones" finds the guitar tone continuing to makes things bleed together. I think they needed to spend a little more time with giving things space in the mix when it comes to post- production. Things are beginning to get a little monochrome in their dynamic flatness.

There is a little bit of a darker groove to "On the Other Side". Tempo wise it pretty much falls in line with the rest of the album up to this point. :Behind" gets a little more aggressive , but aside from that doesn't really stand out from the other song and races long the same panic pace of the others. Its the increased growled grit of the vocals that makes this stand out more than the guitar. The bass coming up in the mix helps "Don't Dance With Me". If these songs gave themselves more room to expand and contract the melodic touches that are buried under the wall of redundant guitar might work better. The vocals remind me a little more of Iggy Pop on this song.

The effects on the vocals at the beginning of "Upside Down" work really well and display what this album could have been if more attention to detail had been given in the production end. They do have more atmosphere on this song, though drone a little more. I'll round this down to an 8, because it's a mixed bag. I think the songs work more often than not, but the sound is not really dialed in and it could use more clarity in the mix . Live I can see how if this is as good as it gets mix wise then it would be a loud punk blur.