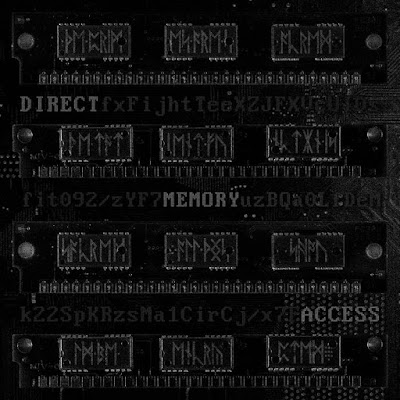 So here is something different this album consists of weird 80s sounding synths set against power/ prog metal this is an unconventional take on conventional metal. This album came out back in April, with little buzz, which is sad because it is very interesting. When it gets glitched out and weird then it's even better converging into something heavier. These moments also make it dark enough to connect with me. When they are flying along at a more Dragon Force pace, it's too upbeat and happy for my personal metal needs. This is the projects first time with vocals and I like the more goth like quality to them when they surface on "Sound Card 8 Bit" even though the music is still a little peppy for me in it's rolling noodle. Thankfully on "FDD Controller" they get darker and weirder, breaking up some of the neo classical melodies for a little longer. While the vocals do go for the gold and are belted out with the passion of power metal they do not get as cheesy.

They slow down on "LPT 1 ECP Mode". The neo-classical synths lines keep coming, at this point reminding me of that "Hooked On Classics" album from the late 70s. The vocals are more subdued and provide a needed shift in color away from the final countdown.  "4 Cascade" is more synth wave with a 90's electro metal feel when the vocals come in an make me think of Rammstein. The darker slower vibe continues on "Hard Disk". Two and a half minutes it gets much heavier. The synths really can only pound so hard, but they do their best . "Host Adapter" continues in more of the neo-classical metal for a lunar landing mode that to some extent defines their sound. It begins to feel less organic and metallic on this song and more like aggressive kraut rock with a Tron groove.

Overall despite the some times redundant neo-classical phrased lead melodies this project is doing something different, previous albums that have been instrumental would not have been my thing, but here the vocals are well done and hep break things up so I'll give this album an 8.5, unsure how many repeat plays I would get out of this more than likely only the songs with vocals would make it to the iPod.