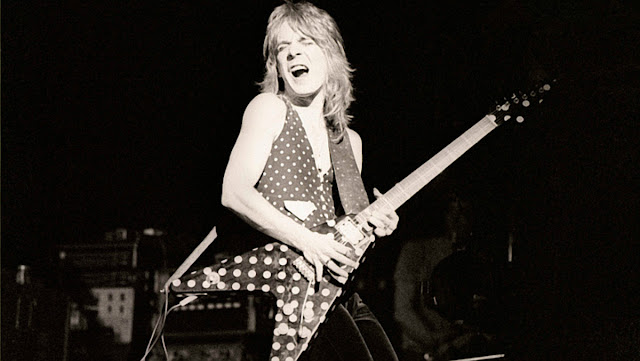 Here we are at the end of our Top 50 Metal Guitarists list, The death of a guitarist I played with turned my thoughts to what makes a good guitarist great. Metal finds the stakes for guitarists high. Shredding can come before playing a fucking song. While all of these guitarists can play a solo, I was also looking for tone, impact on the genre as a whole and how their personalities came through in their playing. So this list of the top 50 Metal Guitarists. If you don't find your favorite guitar player here then know they were just wankers.

His Band is primarily propelled by the galloping bass, but they are also known for their twin guitar harmonies. His partner in crime Dave Murray could be on this list too, but Adrian Smith's playing always struck me as being a little more nuanced.

His vulgar display of riffing hits you like a cowboy from hell. His solos embrace chaos and melody. He has influenced modern metal tremendously,  his original styling and chops that managed to place him above his hero Ace, when it comes to metal Dimebag is just more fucking hostile.

Some of the more melodic and mournful grunge thanks to the drugged trappings of his band that killed their lead singer. Equally blues base as he is a technical shredder his metal chops can slip out of any run
.

Until their peers Iron Maiden, Downing's band was not driven by the bass. They were less technical and sometimes more aggressive. It was their album "PainKiller" that really put un-believers to rest.

His sound evolved from dissonant thrash into a space age prog metal sound that defined his band's weird and wonderful brand of metal. While they took influence from bands like Killing Joke and Discharge, Piggy blended that with a angular metallic aggression to create one of the most unique sounds ever.

Lifeson beat out Piggy, due to the fact if his band did not exist then metal and progressive rock might not find themselves so often hand in hand. You might question how metal is Rush, so I suggest getting back to me after hearing "2112" and "Caress of Steel" this is not to say they were metal for the duration of their career as they became radio rock , but those two albums alone solidify his place here.

He died on my birthday four years ago. Seeing this guy live made me a believer as he was one of the best guitarists I have ever seen live. His band the Devil's Blood, played a jammy style of retro doom boogie. He has two other guitarists in his band that he had to play around and still found the space to do some amazing things.

Some times his tone is too bright for me and I'll blame that on his days with Quiet Riot. He inspired a decade of shred, more tasteful than all the Yngwies , he blended the neo-classical touches in a hard rock context.

Andy beat out Randy because Rhodes' weakness is his strength, he plays darker. Andy also has a more aggressive playing style making him a much more metal player than Rhodes. Andy's style of playing fit perfectly with the horror motif of King Diamond's writing making them the perfect match.

There was a second I had him at number two, but them I thought about the "Mob Rules" and "Heaven and Hell" albums where he plays with the same firey precision that Andy does and summons a similar darkness years before , not to mention his use of the devil's note created heavy metal so there is that.