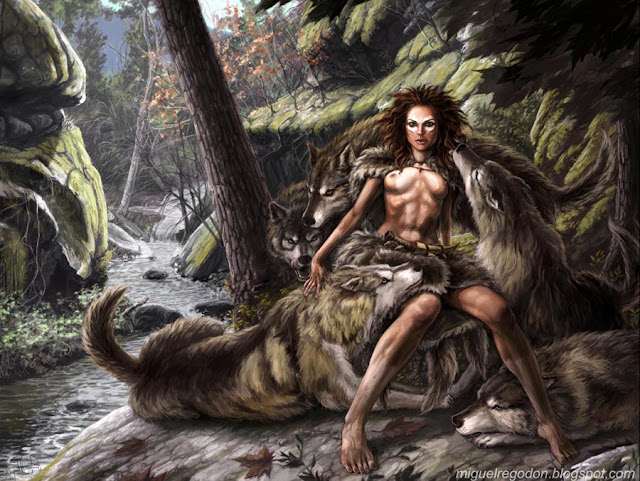 This is all a wolf needs to know about metal in 666 words. First thing to know is Black Sabbath is where it started and what defines metal. Formed in 1968 as a blues band, guitarist Toni Iommi combined the tritone with enough distortion and evil took sonic form. Most “Doom” metal bands are direct rip offs of Sabbath, but all other sub-genres to some aspect of what the band did. Thus the two defining qualities of metal are evil & darkness. Just darkness and you have goth.Sure volume and aggression are also needed qualities but rock and punk can take those on.

Metal continued on in Britain with Judas Priest who formed in 1969, but did not acquire vocalist Rob Halford whose voice defined their sound until 1972. Priest picked up where Deep Purple left off, but with more aggressive sound. Then in 1975 Iron Maiden formed. While Judas Priest had a more radio friendly arena rock sound, Iron Maiden whose songs were driven by the bass playing of Steve Harris took progressive rock and made it metal. Vocalist Paul DiAnno sang on their first two albums which are good, but it was the powerhouse pipes of Bruce Dickinson who joined 1981 that made them larger than life. Their songs became epic tales rivaling Wagner. Most power metal bands were influenced by Maiden as well as some California kids who formed Metallica.


Metal is a drug and like drugs you build a tolerance and need more extreme doses. Up until this point evil might have felt real but it was in 1981 that Dannish singer King Diamond an avowed Satanist made evil a reality with his band Mercyful Fate. Kiss and Alice Cooper had already donned ghoulish makeup , King Diamond took these theatrics in a more sinister direction with his piercing falsetto that he could drop into a guttural growl. Bands like Venom and Celtic Frost also came crawling out of England at this time, but Mercyful Fate was clearly the blueprint the black metal bands from Scandinavia would later follow in their spiked leather corpse painted church burning rampage.


1981 was a key year for metal as two other seminal bands would form. One being Metallica, who ran the gallop of Iron Maiden through a dirty leather filter of Motorhead to create thrash. Metallica also drew influence from Killing Joke, whose song “the Wait” they would cover. Killing Joke also spawned what would be known as industrial. Metallica refined the thrash sound until it had more hooks. Creating massive power ballads with balls. Eventually they took this sound into the mainstream, though it still continued to influence bands like Pantera and White Zombie.

Another key band from 1981 also hailing from California was Slayer. Slayer was more influenced by hard core punk. They played faster and meaner than Metallica. Pretending to be satanic to give their music a darker aura, their lyrics dealt with serial killers and Nazis. Later as metal became more extreme it was hard to tell Slayer apart from the hardcore bands they were influencing.


In 1983 things heated up in Tampa Florida as death metal was born. Death released “Scream Bloody Gore” in 1987, two years later Morbid Angel releases “ Altars of Madness” Not just aggressive , but was chaotic evil. Darker than “Scream Bloody Gore” the lyrics reflected the dark soul of their guitarist Trey Azagthoth, who held a genuine interest in the occult and steered the band’s later albums into being more of a exploration of the Necronomicon. The darkness in their sound would go on to influence scores of death and black metal bands.The metal that followed tuned lower and blasted faster to create something that was a more extreme version of what Morbid Angel did, though Morbid Angels songs held up over time which is more than can said of those bands. But metal doesn’t have to be so dark and evil you might say. This is true but if it isn’t it will also suck.