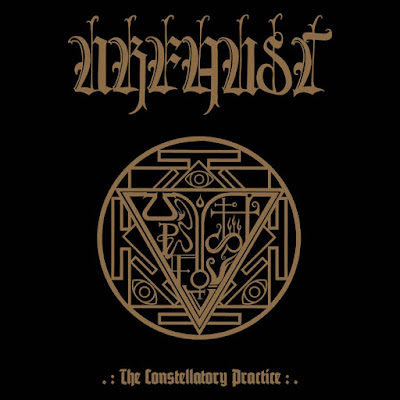 Is it me or do you never find out something is part of a trilogy until after the fact? This album is the final part of a trilogy this band's two previous album were also a part of . Maybe they don't come out and say something is a trilogy because then it really sets the stakes high for the 3rd album to be the climax. What we get on the first song is 13 minutes of hypnotic drone. It's at a more doom pace. The vocals are sung rather operatically but without the same baritone stiffness of previous albums. "Behind the Veil of the Trance Sleep" continues with this ritualistic hypnosis. It creates a sonic shimmer that reminds me a little of Swans. More punishing in it's pounding than the opener, I would not call this black metal, but Urfaust has been defying the bounds of black metal since their last album.

The ambiance continues to grow thicker. More abstract in the synth swell of  " A Course in Cosmic Mediation". This feels like a more atmospheric movement extending out of the previous song rather than a song unto itself. "False Sensorial Impressions" took a second listen in order for me to fully digest it. It is darker and there is some harsh screaming, so closer to black metal than the first three songs. Though even with Urfaust's earlier work I thought they tested the bounds of black metal and did it their own way. This album might be a step beyond that as droning seems to be the prime motivator. The atmosphere is more unsettling on this song, but dynamically it is flat by virtue of working of the surreal drone. They evolve into something that is more of a song on "Trail of the Conscience of the Dead". Over driven bass keeps this song moving. Thanks to the drums this comes closer to being doom. I like when the cello comes in to add another melodic layer. At 12 minutes it's a little long and could have benefited trimming the fat on the front end of the song.

With a name like "Eradication Through Hypnotic Suggestion" the eradication part of that equation would make this the album's heaviest song. But no it's an even more atmospheric drone to the song of being more of an outro than a song. I'll give this an 8, because musically there are pleasing sounds and when they do decide to make a song it works, I would prefer to have the drone dialed back and hear more song shine through this murky darkness of hypnosis. This is what they wanted and it's what you get . They are still one of the more original acts to come from black metal though this might be ritualistic it's not black metal.