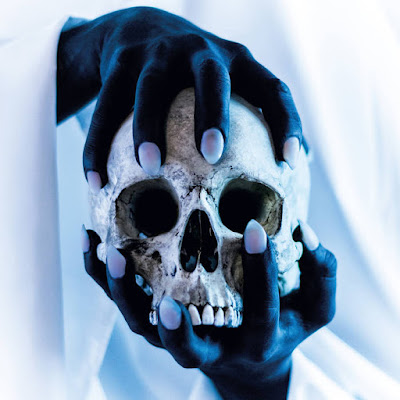 For some reason I have been on a more electronic kick. This came about due to a Blood Music Records kick I was also on. The retro synth trend that makes everything sound like it could be on the soundtrack to "Stranger Things" is pretty widespread as we even heard it seeping into the new Ihsahn album. This is this projects obvious stock and trade.  Here is an electronic album that is as dark as industrial and as heavy as industrial, but has more of a retro synth wave sound battling inside of them like angels and demons. "Prowler" has enough groove to support itself as an instrumental and the samples certainly help give the song a voice. He smoky vocals of "Sigil" work , but make the song a little more melodramatic and gothy in a 90s darkwave way.

There is a heavier blast on "Beliar" then it takes an angular glitch turn like something Igorr might do doom paced legion screamed vocals and odd retro synth melody. the pace picks up  for Shilohs Lament Malum has somewhat goth tinged vocals , some of the synth melodies are too happy . The album's theme is translated by the samples which are all exorcism. The lyrics to "Malum" don't really convey the same thing and appear to be about wasting time on someone.


"Commandment" gets more aggressive , but the synths keep it from being industrial along with the fact the programmed drums don't have as much of a kick to them. The over driven vocals would not be out pf place on an industrial album. It is at time like electro grind core in some of the explosive outbursts in-between church bells ringing and Art Bell samples. I'll round this down to an 8. Some of this gets redundant and then the vocals sometimes remind me too  much of cheesy darkwave rather than cool dark wave because of the melodramatic breathiness of the vocals.  Despite this the album is certainly worth a listen even though I am not going to gild the coffin for you . The other word of warning would be it's not as Satanic as some might lead you to believe, once again I review black metal half the time so the bar is high for the level of goat kissing and Christ fucking we want around here.