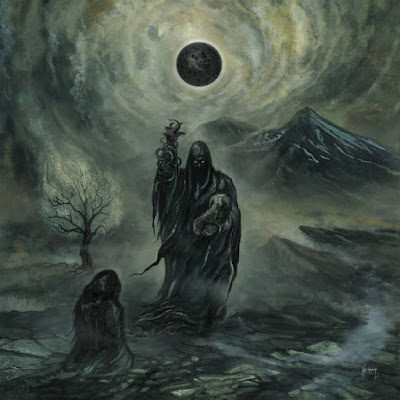 This blackened act from Portland lines up to take another stab at what Dissection did.
They kick some blast beats around this, to give it a hyper thrash sensibility. The vocals split the difference between black metal and death metal. The lower vocal is more clearly death metal, with the higher rasp carrying more of a black metal feel.Sometimes these are switched out in more predictable times than others.  It's well produced and these guys can obviously play their instruments, so what I am listening to is the quality of their songs. Can they do anything at less than a 140 bpms that doesn't sound like they are recycling countless bands that came before them.Guitar melodies and double bass sometime compensate for the album's over all more singular focus.

They a good a mimicking Swedish melo-death. Throw some blast beats on top of this and they you certainly don't sound like an American band. To the point of almost sounding like a hookier more Swedish version of Mutilation Rites. It's almost cultural appropriation , but if it's white people stealing from other white people then no one males a big deal of it. It all trickled down from NWOBHM could be one argument. Three minutes into the title track and I am wondering where they can go from here. The answer seems to be deeper into death metal. We begin to hear Entombed seeping from the corners. The guitar solos keep the melody in mind and are another working part of the song. Lyrically it's a mute point as the vocals are obligatory. The lower growls are well done. The half time breakdowns are effective, though the most betraying of their American roots.

They could stand to shave the first minute of acoustic intro off of "Wanderer" . Truth be told I am not sure there is enough here to justify it being an instrumental and this might have worked better into one of the other songs to provide more dynamics. They do hold onto the strum of guitar for a triumphant gallop into "Blood Sad Ash". Here their sense of melody begins to have a greater pay off.  Aside from the more Mayhem like croak of the vocals that open the song "Spheres" sounds like more of the same. They are locking into their formula at this point. The drumming is great , but to play this kind of music it has to be. To be a rehashing of guitar harmonies we have already been blasted past earlier in the album or at least something close enough ten minutes of the closing song get tedious and tuned out. These guys are good at what they do it just feels like another Americanized remake, much like "Let Me In". If you never heard the original then you might be more impressed. In terms of execution alone I'll give this a 7.5, which is rounded down due to lack of originality. But fans of melo-death like that sort of thing.