At the Heart of the World : "Rotting Form" 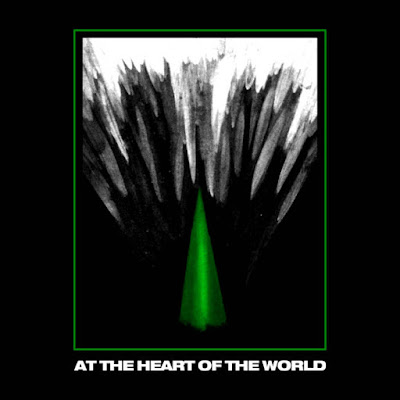 After some raw feedback this project snarls into the thick of things. They owe more to Godflesh than than the more Skinny Puppy like brand of industrial Youth Code has descended from. The vocals are harsher. They are also male. Sometimes the synths are just as metallic as the guitars, but that is where the comparison to Youth Code ends, due to the fact these guys have guitars and are not afraid to use them. The vocals are more metal in the way they sometimes go into growls where the chick from Youth Code is aggressive, but merely shouting. Now that we have that comparison out of the way, lets talk about what is going on here. "Golden Cross" has more metallic guitars than the first song. The square synth sound is more plastic and 80s in it's tone like they are from a Kraftwerk record. Not a complaint as I think it is a more analog quality I have not heard in a lot of industrial.

The synths bring in a more melodic Blade Runner quality to "Embrace the Cripple". There is a more kraut rock groove set against the melodic metal guitar that is an interesting juxtaposition. It hits the sweet spot of being heavy sonically and heavy metal. There is more of a Liturgy like angular syncopation to "Fear and Peace" before the chanted vocals bring it back into Godflesh's backyard. Sonically it's more straight forward and not far removed from other things I have heard before so the songs before this have a more original quality that intrigues me more. The guitars are thickly layered here and the drum machine has enough balls to it so it doesn't just patter weakly beneath the guitar.

The title track has an apocalyptic pound and a vocal call and response that feels more organic. The jagged single note guitar melody almost feels like it is playing a bag pipe line. The albums longest song is the four minute "If I Have Loved You I Have Failed You".  The vocals are almost more sung, but the anguish keeps him from singing actual notes. I like the darker melodies implied here. The layered synths work well against the guitars. Sometimes it is hard to hear where one begins and the other ends. There is a heavier breakdown like part that finds the vocals going into more of a growl. "Shackled" finds the synths leading in with frequencies just as heavy as what the guitars have done. So when the guitars join them its pretty powerful. In some ways these guys remind me of Atriarch's bizzaro industrial brother. I'll give this one a 9 and see how it sits with me. If you are really hungry for industrial then round it up to a 9.5, I am just thinking due to the nature of this beast the album does not work off of grooves like Ministry does so I can see where it might not wear out my iPod like the last KMFDM did as this is a denser listen.

Email ThisBlogThis!Share to TwitterShare to FacebookShare to Pinterest
Labels: "Rotting Form", 9, album review, At the Heart of the World, industrial, portland