Bestialord :" Law of the Burning" 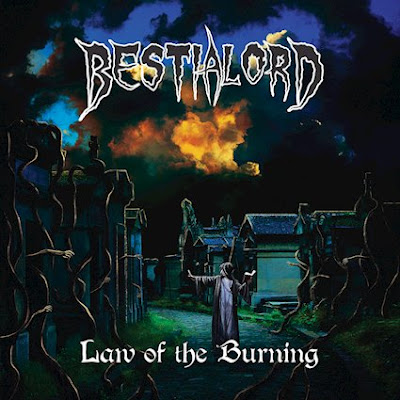 Press kits can be deceiving. Hell even record reviews can be misleading, I think one thing I can pride myself on with this blog is giving you a straight from the hip, cut the bullshit evaluation of what is going on here. So this self proclaimed horror doom band which features Mark Anderson of Manilla Road, might not have been the doom I was looking for , but they do crank out some pretty decent metal regardless. This band shares some common ground with Acid Witch sonically. More upbeat and double bass heavy than what I think of as doom, there are early thrash influences abounding as much as their is any  kindred spirit to Candlemass or Black Sabbath. "Vermin" has a more head banging chug. I think they are not thinking of themselves as death metal because they are not as fast as most of today's bands, but a certainly as fast as older Obituary. The gallop going into the chorus is very effective and makes this song more powerful than the opener. "All Fall Down' I am just hearing thrash, with no touches of doom at all. While some of the gallops work much like old Metallica, there is not a ton of originality in it.

The two songs that follow both go down a more thrashy road with the title track might be a punchier more old school feel to thrash, with a more deliberate, but not doomy darker side going toward what would be the chorus. There are some cool guitar melodies that I did not notice the first go around with this album.   "Marduk Kurios" is very focused by I don't think it's as good as the title track. "I Am Pain" which seems to be about "Hell Raiser" doesn't offer much in the way of riffs that actually make it stand out as a song. There are some well played played punches and the bass can be felt more on this song, but it finds the edge the band had beginning to dull as they do more of the same.

"Loathed Be Thy Name" is a higher quality of writing than the previous song, but the wheel is not being re-invented. At times this reminds me more of Possessed. There is a darker touch to "Above the Vaulted Sky". The riff is a little more biting, think "Bonded By Blood" era Exodus. The songs tend to run around the four minute mark, but I think given the rather straight forward nature of what they are doing they could have even been scaled back to three. They slow down on the last song, and I guess it's more of a Celtic Frost pace, but I would be reluctant to call this doom even when dialed back to this.  These guys were sucessful in taking me back to that early Possessed like sound which I used to love as a teenager, so while I am rounding it down to an 8, it's well done for what it is and if you are a fan of mean spirited early thrash then check this out for sure.